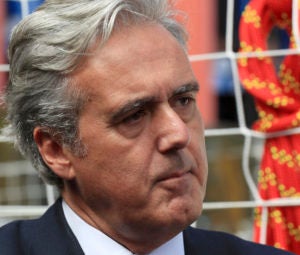 This file photo dated Aug. 18, 2017, shows British International Trade Minister Mark Garnier, who has been caught up in the Westminster sexism storm. Britain’s Cabinet Office will investigate allegations made against Garnier by his former secretary Caroline Edmondson that he breached conduct rules by asking the secretary to buy sex toys. AP

Health Secretary Jeremy Hunt said Mark Garnier will face an investigation after the minister’s former secretary told The Mail on Sunday that Garnier gave her money to buy two vibrators at a Soho sex shop and called her a disparaging name in front of witnesses.

“The facts of (the report) are in dispute, so the Cabinet Office are going to look at it and see if there is a breach,” Hunt told ITV’s Peston on Sunday program.

The investigation comes as Britain’s political establishment faces increasing scrutiny over allegations of sexual harassment. The soul-searching follows the scandal surrounding Hollywood mogul Harvey Weinstein, who was fired after The New York Times published an expose that detailed decades of complaints against him.

Environment Secretary Michael Gove was forced to apologize Saturday after he attempted to joke about Weinstein during a radio interview. Meanwhile, women working in the British Parliament have reportedly created message groups to warn colleagues about harassment.

Hunt said Prime Minister Theresa May would be writing to the Speaker of the House of Commons, John Bercow, to develop a plan to change the culture at Parliament.

“I think people at home will be quite angry about this because, a bit like the Harvey Weinstein stuff, Parliament, like Hollywood, is very good at preaching to people what they ought to be doing and how they ought to be behaving. But I’m afraid this shows that in our own backyard we don’t live up to the high standards that we would expect others to,” Hunt told ITV.

Garnier’s former secretary, Caroline Edmondson, told The Mail on Sunday that he gave her money to buy two vibrators — one for his wife and one for a woman in his constituency office.

Garnier acknowledged that the incident took place but vehemently denied it constituted sexual harassment. However, he conceded that in the current climate his actions could be seen as “dinosaur behavior.”

Garnier said the toys were purchased when he and Edmondson were out shopping after a Christmas lunch, and he told her it was not a good idea.

Garnier did not respond to a request for comment sent to his parliamentary office. /cbb