I’ve been demonized in drug war–Duterte 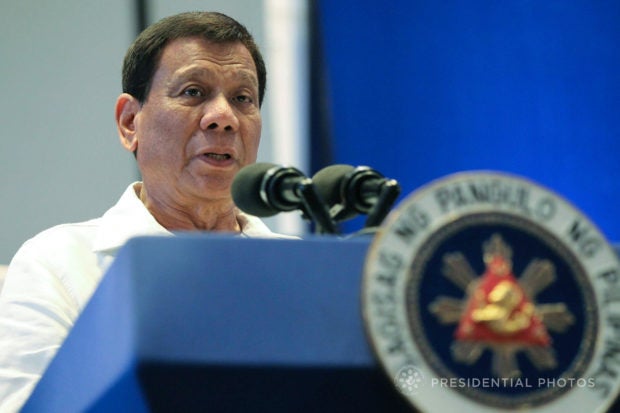 President Rodrigo Roa Duterte, in his speech during the 6th Philippine Professional Summit at the Manila Hotel on October 26, 2017, reiterates that his oath of office mandates him to enforce the law regardless of the violators’ social status. KARL NORMAN ALONZO/PRESIDENTIAL PHOTO

President Duterte on Wednesday defended his bloody war on drugs, telling Southeast Asian lawyers he had been “demonized” and denying allegations of state-sponsored killings of drug dealers and users.

His administration’s human rights record has been strongly criticized by Western countries, and is one of the issues US President Donald Trump plans to raise on a visit to Manila next month to attend the Association of Southeast Asian Nations (Asean) summit.

Defending his signature program before members of the Asean Law Association late on Wednesday, Mr. Duterte said that while some things said against him were true, he had not ordered extrajudicial killings of drug suspects as his critics alleged.

“I know that I have been demonized. And well, of course, I will assure you upon my oath as a lawyer and before God that some are true, some are not. And the extrajudicial tag that has been placed on me is simply not true,” Mr. Duterte said.

He said he had warned drug peddlers that he would kill them if they destroyed the country and the youth that he was duty-bound to protect as President and asked if anyone could fault him for making that statement.

Mr. Duterte traced his drug policy to the time when he was mayor of his hometown, Davao City.

“So when I became mayor, I had to do something with my mouth. And I said, I would kill you, if you destroy my city. If you keep on distributing drugs and that would destroy the future and he becomes just like a zombie with no direction and a wasted life. And if you do it in numbers, I will kill you. Make no mistake about it, I will kill you. And that is the rule when I became President,” he said.

Mr. Duterte said he also told the police not to be afraid to do their job. But he did not tell them to execute people, he added.

“I did not tell any policeman, for the life of me, to kill just everybody perhaps sitting down or kneeling in front of the police with his hands outstretched in surrender. That is really murder,” he said.

“I am sure that there never was a time that I said, ‘Go out and just kill the criminals.’ It’s always been, ‘Go out, do not be afraid. I will support you,’” he said.

Mr. Duterte also repeated his view that “shabu” (crystal meth) users have shrunken brains, which is why they have become violent and aggressive,  leading to their deaths.

He said the people he defeated in last year’s presidential election could not accept their loss and made up figures on the people who had died in his war on drugs.

“So most of the victims who were killed and according to the bright guys of this country and the political opposition, the guys who cannot accept defeat, they invented the fake news and concocted figures,” he said.

“I do not deny that there were people killed in that campaign. But what they say is … Why are they killed? Because a shabu user or a lieutenant of the shabu syndicate has always a gun,” Mr. Duterte said.

That was his experience as mayor, he said.

“And sometimes I am there to watch, sometimes I participate. They always fight it out,” he said.

That, he said, was the reason he insulted the United Nations and the European Union when they “follow[ed] the line of the opposition” who claimed that thousands were killed in his  war on drugs.