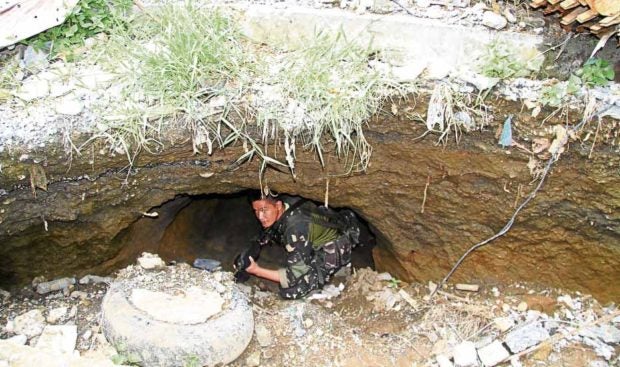 MARAWI CITY—The main battle zone in Marawi City seized by Islamic State (IS) supporters resembles a tsunami-hit wasteland, with bullet-riddled mosques and a network of tunnels testifying to their hide-and-kill tactics.

Two days after the military declared an end to the five-month conflict in which more than 1,100 people died, scrawny feral dogs and swallows flying above the ruins were among the few signs of life in Marawi’s devastated neighborhoods.

Many buildings were piles of gray rubble as if crushed by a tsunami roaring in from Lake Lanao just behind them.

The pink minaret of one mosque was so riddled with bullets that most of its plaster had been stripped off and just its iron beams remained.

When the Maute and Abu Sayyaf terrorists initially rampaged through Marawi, the principal Islamic city in the mainly Catholic Philippines, military commanders expected a relatively brief battle and were surprised at their enemies’ ability to hold out for so long.

The military maintained near-daily bombings, with state-of-the-art American radar helping to identify targets, yet the terrorists could often dodge the explosions.

A brief tour for journalists on Wednesday showed some of the terrorists’ ratlike survival techniques, including the digging of holes through concrete floors up to 25 centimeters thick.

These connected to the city’s drainage system, allowing them to scurry to nearby buildings undetected, according to commanders who fought the ground war.

“They didn’t want to pass open terrain, especially in the latter part [of the war],” Lt. Col. Samuel Yunque, commander of an Army Special Forces unit that fought the entire campaign, told reporters.

But Yunque said the military also adapted to the militants’ tactics by blasting their own virtual tunnels or “rat holes” in walls between buildings so troops could move quickly without going back into the open streets.

In the early days, Yunque said, his unit took two days using conventional tactics to rescue 16 crewmen of two armored vehicles that had been disabled by the militants’ rocket-propelled grenades.

“They were surrounded by snipers on tall buildings and they were attempting to burn them alive by tossing molotov [firebombs] at their vehicles,” he told reporters.

“When we rescued them they were singed and down to their shorts. They had their firearms but they had not eaten for days and were about to run out of bullets,” he said.

The military had repeatedly said another reason the war dragged on so long was because the terrorists were hiding in mosques and using hostages as human shields.

Troops were meant to avoid striking the mosques, military commanders said frequently during the conflict.

To end the fighting, however, the military decided it had no choice.

The final battle on Monday took place inside a mosque, claiming the lives of two soldiers and 42 fighters, Armed Forces chief of staff Gen. Eduardo Año said on Monday.

(Col. Romeo Brawner Jr., deputy commander of the military task force fighting the terrorists, said on Sunday that the terrorists were trapped in a two-story commercial building by Lake Lanao. –Ed.)

In one part of the battlefield, the cupola of a bullet-riddled mosque with a twisted metal crescent moon on top and its minaret lay toppled and broken between two bombed-out buildings.

In another area, a crater big enough to swallow a car was all that was left of the city’s police station.

The authorities said the militants beheaded a police officer there and released hundreds of inmates from the adjacent city jail on May 23, the first day of the conflict.

Months before they launched their attack, the terrorists secretly stored food, guns, bullets and explosives inside city buildings before infiltrating at least 1,000 men into the city, according to the military.

President Duterte and security analysts said the terrorists had planned to set up a Southeast Asian IS base in Mindanao, taking advantage of lawlessness partly stemming from a Muslim separatist rebellion that had been going on for decades.

The militants at one point controlled more than 4,000 buildings, according to the region’s military commander, Lt. Gen. Carlito Galvez.

At least 920 militants were killed, while 165 troops and 47 civilians died, according to the military.

The fighting also displaced about 400,000 people, and made the eastern half of the city uninhabitable for many years.

Authorities are only now beginning to grapple with a multibillion-dollar rehabilitation program. —AFP