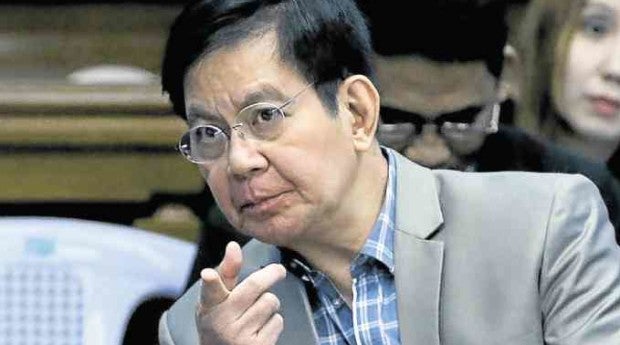 The Senate public order and dangerous drugs committee, which has been looking into the death of University of Santo Tomas (UST) law student Horacio “Atio” Castillo III, is set to hold its third and possibly last hearing on November 6, Senator Panfilo Lacson confirmed on Thursday.

In a text message, Lacson said: “On the part of the Senate, particularly the committee on public order and illegal drugs, after consultation with the members, we have scheduled the third public hearing on Monday, (November) 6 to possibly wrap up the inquiry and introduce the pertinent legislation to strengthen RA 8049 with the end in view of avoiding future deaths or physical harm on young people like Atio Castillo III.”

The senator believed that it is “still a long way to go before justice is finally served” for the 22-year-old Castillo despite the testimony of former Aegis Juris fraternity officer Marc Anthony Ventura.

Ventura reportedly narrated in his sworn statement submitted to the Department of Justice (DOJ) how the Aegis Juris fraternity’s hazing rites last September 17 had resulted in Castillo’s death.

Ventura is now under the government’s witness protection program (WPP).

“In any criminal investigation and trial, the details of the truth always add up to the credibility of a testimony. Ventura’s narration of events that led to Atio’s hazing to death has provided exactly that,” Lacson said.

“Sadly, I can only imagine the mixed feelings of relief and agony that the victim’s parents are going through right now – how they hate to hear what they have wanted to know. Having said that, the manner by which the initiation rites were conducted, both preliminary and final, could shock even those who have experienced the same ordeal when they joined their own fraternities.”

“It’s still a long way to go before justice is finally served though,” the senator added.

In a Twitter post on Wednesday, Lacson said John Paul Solano – one of the prime suspects in Castillo’s death – “blew all his chances to become a state witness,” considering the significance of the details that Ventura put in his sworn statement.

“With the tell-all tale of Marc Anthony Ventura as bared by SOJ (Secretary of Justice Vitaliano) Aguirre (II), John Paul Solano blew all his chances to become a state witness as he would have been the most probable Aegis Juris member to qualify as such,” Lacson earlier said via Twitter.

On Wednesday, Ventura, together with his mother and lawyer, met Aguirre to bare all that he knew before, during, and after the initiation rites that led to Castillo’s death.

Senators Miguel Zubiri and Joel Villanueva considered Ventura’s statements as a welcome development that could lead to justice for Castillo.

The Senate committee initiated on September 25 its inquiry into Castillo’s death, following Zubiri’s Resolution No. 504.            /kga