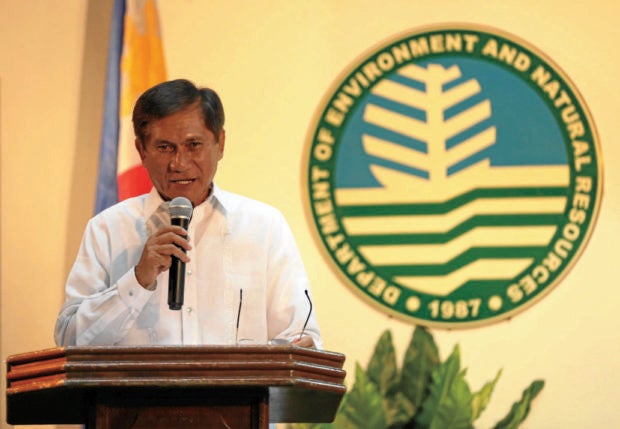 CEBU CITY — Protest actions against a proposed coal-fired plant and destructive mining activities were held in the Visayas on Wednesday, after reports came out that Environment Secretary Roy Cimatu plans to lift the ban on open-pit mining before the end of the year.

In Cebu City, 50 protesters led by the Philippine Movement for Climate Justice (PMCJ) marched from P. Del Rosario Extension to Colon Street before holding a rally against the putting up of a coal-fired power plant close to a residential area in Barangay Sawang Calero in Cebu City.

The protesters urged the Cebu City Council to deny the application for a permit of Ludo Power Corp. to build a coal-fired plant in the village after learning that the company had already worked out requirements to secure an Environmental Compliance Certificate (ECC).

An ECC certifies that a project or activity will not pose environmental hazards or damage and that its proponents are capable of implementing measures to protect the environment.

One of the considerations in the granting of an ECC is the location of the project. Power plants are allowed only in medium or high intensity industrial (1-2) districts.

He said they hoped the councilors would go against the coal plant.

In Tacloban City, about 200 residents of Manicani Island in Guiuan town in Eastern Samar held a protest rally before the Eastern Visayas office of the Department of Environment and Natural Resources (DENR) to show their opposition to the application for renewal of the Heritage Mining Corp. (HMC) for another mining project on their island.

The 25-year Mineral Production Sharing Agreement (MPSA) granted to HMC for the extraction of nickel ore will expire on October 27.

The MPSA is granted by the government to a mining company for the right to mine a contract area.

The mining coverage of the HMC is about the size of Manicani’s land area of 1,165 hectares.

Lilibeth Obello and her five-month-old baby girl, Louise Noelle, was among those who were at the rally.

“I have my baby with me to make a point with the DENR. That we are not only fighting for the protection of Manicani Island for today but for the generations to come,” the 42-year-old mother said.

“We don’t like any mining activity in our small island. It is causing destruction in our our community,” she said.

Rebecca Destajo, president of the Protect Manicani Island Society, said the mining operations on their island have not only resulted in the destruction of their environment like siltation of their water due to mine wastes but have also impacted on their interpersonal relationships.

“We have to admit that there are also those who support the mining activity of HMC, especially whose working with the company and this has affected the relationship among families and friends in Manicani,” Destajo said.

“Manicani is just a small island and has been been declared as a protective island. This means mining activity should be prohibited,” said Larry Pascua, regional coordinator of Sanlakas, which joined the protest rally.

In Antique, the environmental group Save Antique Movement decried the DENR announcement that the ban on open-pit mining, which was imposed by former Environment Secretary Gina Lopez, will be lifted by DENR Secretary Roy Cimatu.

“We are very disappointed. We had hoped that (Cimatu) will continue the policy to protect the communities affected by mining,” said Bong Sanchez, the president of the group.

Antique hosts the Semirara Mining and Power Corp., which operates one of the biggest coal mines in Asia on Semirara Island in Caluya town.

Environmentalists have repeatedly accused the company of destroying the island but the SMPC has denied these and insists that they have been complying with environmental laws and standards.

In a statement, the Capiz Environmental Protection Alliance (Cepa) said that lifting the ban on open-pit mining “will usher a deluge of destructive mining activities which are already happening even with the supposed ban.”

The Capiz provincial board last year voted to lift a 50-year moratorium on large-scale mining in the province.

But 12 of the 17 local government units in Capiz – including Roxas City, the capital – passed separate resolutions calling on the provincial board to reverse the lifting of the moratorium. /atm