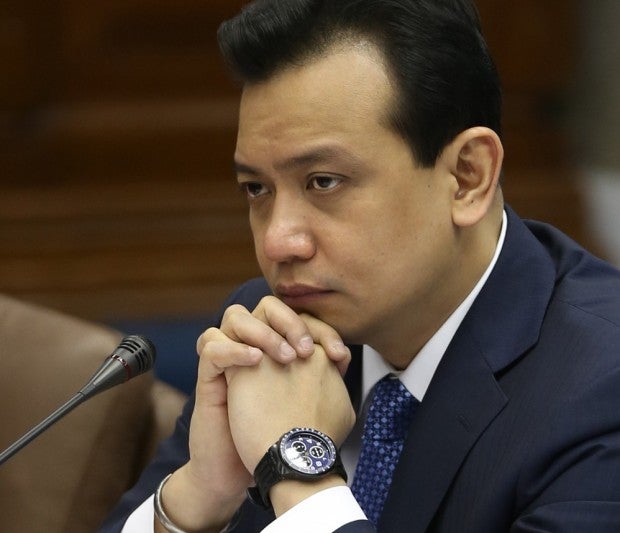 The camp of former Vice President Jejomar Binay on Tuesday called Sen. Antonio Trillanes IV “the father of fake news’’ in the Philippines after the Department of Justice (DOJ) filed a libel complaint against the senator.

Trillanes, who is now in the United States, has no statement on the matter, his staff said.

Binay’s spokesperson Joey Salgado said the DOJ’s resolution to file a libel complaint against Trillanes in the Makati Regional Trial Court “vindicated [Binay] over the malicious claims made by the senator.”

The DOJ’s move, he added, only confirmed that the Senate hearings “were purely in aid of political demolition, not legislation.”

According to Salgado, the DOJ’s resolution also exposed Trillanes as “a fake crusader against fake news,” calling the senator the “pioneer of fake news” since 2015.

“He was spreading fake news since 2015. He deserves the unflattering title ‘father of fake news in the Philippines,’” he added.

Read Next
Sueno critic gets Land Bank post
EDITORS' PICK
Next level mobile photography within reach with vivo X70 co-engineered with ZEISS
Delivering delight against all odds
Leaked: A 60x Zoom and all-new Helio G96 mean a complete overhaul for TECNO Mobile’s new CAMON 18 series
Duterte blasts rights groups for overlooking the ‘other side’ of drug war
153 protests filed vs China actions in PH waters in 2021 — DFA
Atienza tells Bongbong: You’re not a millennial to be ignorant of martial law atrocities
MOST READ
Robredo to supporters: Be calm, gentle and do good deeds
Duterte inaugurates P684-M bypass road project in Quezon
Matibag calls Senate budget hearing ‘political,’ gets kicked out
Cristine Reyes opens up on her trauma from abuse, painful childhood
Don't miss out on the latest news and information.