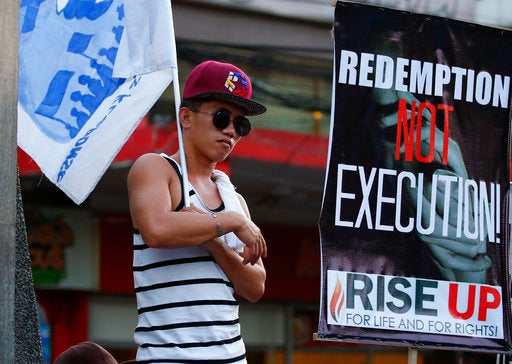 A protester stands beside a placard during a rally near the Presidential Palace to protest the “extrajudicial killings” under President Rodrigo Duterte’s so-called war on drugs which coincided with the U.N. Human Rights Council Universal Periodic Review in Geneva, Switzerland, Monday, May 8, 2017 in Manila, Philippines. Filipino Senator Alan Peter Cayetano briskly defended the human rights record of Duterte’s government before the U.N. body in Geneva on Monday, saying his government always “seeks to uphold the rule of law” while critical Western nations aired concerns about deadly vigilante justice and extrajudicial killings in the country. (AP Photo/Bullit Marquez)

The Philippine National Police cannot always fool the public in citing the “nanlaban” argument as a reason for authorities to kill drug suspects, opposition lawmakers said on Tuesday.

This came as the Social Weather Stations’ latest survey showed the respondents who do not believe police accounts of slain suspects resisting arrest outnumbering those who believe in the police by 20 points.

“You cannot hide the truth, as the cases become numerous the people will naturally learn about it. It’s common sense,” said Caloocan City 2nd Dist. Rep. Edgar Erice of the Magnificent Seven bloc.

Meanwhile, Bayan Muna Rep. Carlos Isagani Zarate said “this should serve as a very loud wake up call to the Duterte administration.”

“This is also a growing sign of not just the PNP’s but the Duterte administration’s isolation from the people. Instead of disregarding this sign, the administration should now seriously reorient its anti-drug campaign away from the current fascist thrust that resulted to thousands of extra-judicial killings,” Zarate said.

The SWS on Monday evening announced that the Sept. 23-27 survey showed only 18% believing that the police are definitely or probably telling the truth, compared to the 38% who believe otherwise. (The remaining 45% were undecided.)

The resulting net rating of -20 was the lowest since SWS began measuring public response to the angle commonly cited by authorities in justifying the killings which the Philippine National Police claimed to number above 3,000.

Previous net ratings recorded by SWS were -1 in December 2016, -8 in March 2017, and -3 in June 2017. The Duterte government’s controversial antidrug campaign was rocked in August by the successive killings of teenage suspects and the investigation on the smuggling of P6.4-billion worth of shabu (crystal meth) from China.

“Hindi lahat ng palusot nakakalusot (Not all of their excuses will work),” Akbayan Rep. Tom Villarin said on Tuesday.

“This is a sign that less people are buying the ‘nanlaban’ excuse of the PNP, and more people have had their eyes opened to the brutal and bloody reality,” Villarin said.

The only way for the PNP to regain people’s trust is by holding their officers accountable for thousands killed in the government’s drug war, Villarin said.

House of Representatives dangerous drugs committee Rep. Robert Ace Barbers, however, maintained that the PNP should not be blamed for the deaths as rogue policemen and politicians may have been involved.

“We should understand that the PNP should not be held accountable for the rising number of tragic deaths,” he said. “It is possible that the different drug syndicates are cleansing their ranks, or that maybe they are eliminating competition, which includes rogue cops and politicians who belong to these organizations.”

Barbers added: “Some trigger-happy undisciplined cops may have played a role in some of the killings although they cannot be blamed completely as they are putting up a fight against ruthless syndicates whose members are ready to die to defend their illegal trade.”