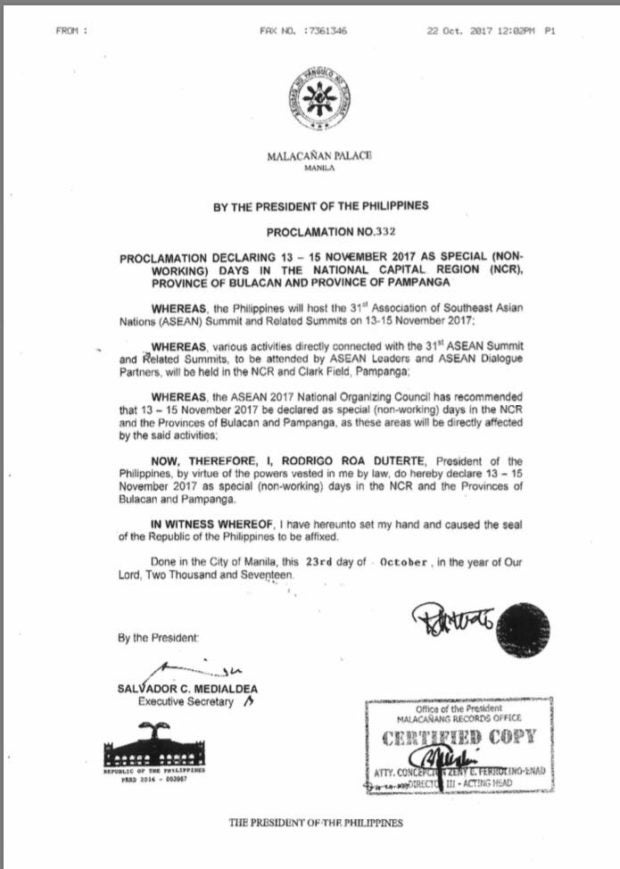 President Rodrigo Duterte has declared November 13 to 15 as Special Non-Working Days in Metro Manila, Pampanga, and Bulacan, as the country hosts the 31st Association of Southeast Asian Nations (Asean) Summit and Related Meetings.

Executive Secretary Salvador Medialdea, by the authority of Duterte, signed on Monday Proclamation No. 332, which stated that:

“The ASEAN 2017 National Organizing Council has recommended that 13-15 November 2017 be declared as special (non-working) days in the NCR and the provinces of Bulacan and Pampanga, as these areas will be directly affected by the said activities.”

The Asean meetings will be held in Metro Manila and Clark in Pampanga.

Earlier, Metro Manila mayors had suspended classes on all levels in the National Capital Region (NCR) on November 16 and 17, as well.

While the summit would end on November 14, Quezon City Mayor Herbert Bautista said the Metro Manila Council decided to suspend classes in all levels since thousands of delegates were expected to tour Metro Manila after the summit.          /kga