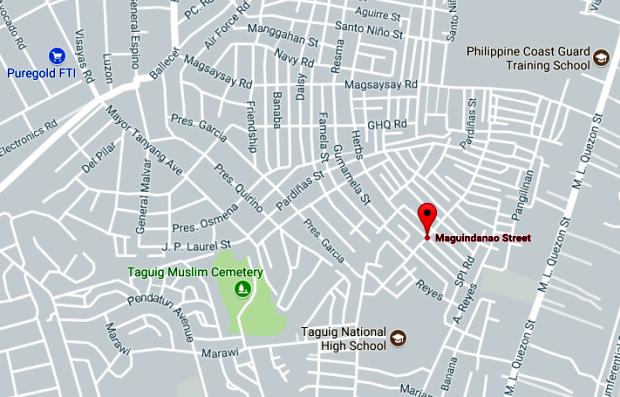 Two drug suspects were killed by men who they recently transacted with in what police called “agaw droga” (snatch the drugs) scheme hatched by illegal drug syndicates.

Lyndon Trindad and his still unidentified male companion died on the spot after being shot in the head and neck fired by still unidentified assailants at an alley near the corner of Road 6 and Maguindanao Street in Barangay New Lower Bicutan in Taguig at 8:20 p.m. Saturday.

Police recovered at least six spent shells from .45-caliber and 9-mm pistols at the crime scene.

Arribe said that text messages they found on the cellphone of Trinidad, a 29-year-old resident of Barangay Bagumbayan, showed that he and his companion were going to buy crystal meth, or shabu, from a pusher in the area.

“But then they fell to agaw-droga suspects,” Arribe said. “They were about to leave after buying shabu when they were shot from the back.”

[If you don’t change, it’s drugs that will kill you. You’ll get what’s coming to you.]

Last week, Ronnie Santa Ana, the top drug criminal in the list of PCP-2, was gunned down by his partner in crime.

The duo and the rest of their group were allegedly involved in an “agaw droga” scheme.

Arribe said the modus operandi involves letting other drug pushers or users buy illegal drugs. After the transaction, they would ambushed, with the killers taking away the money and drugs for reselling.

He noted the victims’ money and sachets of crystal meth were not found at the crime scene.

“They were doing this to their fellow drug suspects because price of shabu here has skyrocketed to P24,000 per 5 grams,” Arribe said, noting that people could purchase shabu for the same weight for only P6,000 before.

Arribe said police antidrugs operations had cut off the supply in their area.

However, since President Rodrigo Duterte ordered the Philippine National Police to stop conducting drug operations, drug lords had gone back into business.

“We still have more suspects to arrest, but we cannot do drug operations anymore,” Arribe said. “We already requested the Philippine Drug Enforcement Agency to raid the area of New Lower Bicutan, but they still have to act on it.” /atm