Drilon sees a need for Senate involvement in peace process 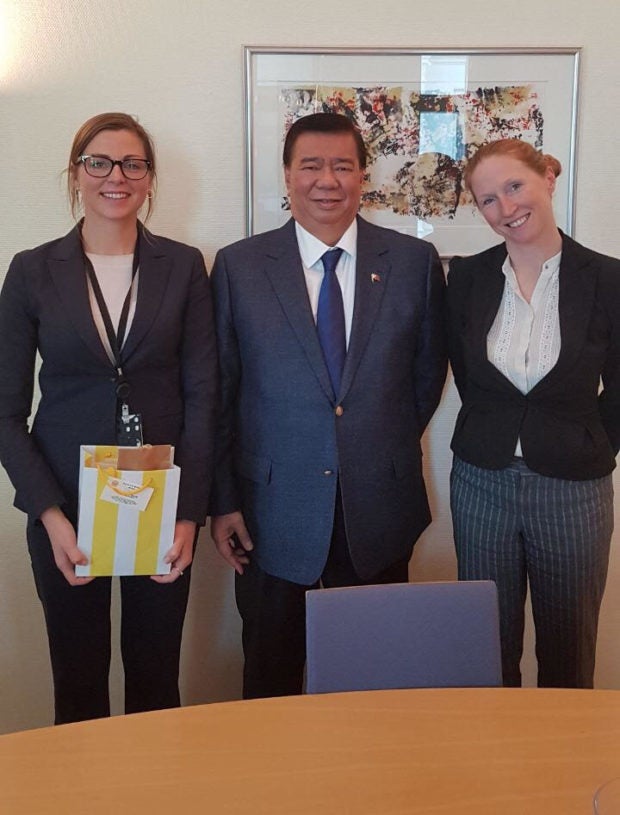 Senator Franklin Drilon went to Oslo, Norway, after participating in the 137th Inter-Parliamentary Union (IPU) Assembly held in St. Petersburg, Russia, and met with Elisabeth Slåttum and Idun Tvedt of the Section for Peace and Reconciliation, Norwegian Ministry of Foreign Affairs, where they discussed Norway’s efforts to peacebuilding in the Philippines. Photo courtesy of Drilon’s office.

Senate Minority Leader Franklin Drilon said there is a need for the Senate to take a more active role in the peace process during his meeting with the new Norwegian government special envoy to the Philippines on peace efforts with the National Democratic Front of the Philippines (NDFP).

“There is a need to involve the Senate in the peace and reconciliation efforts between the Philippines and the NDF because in the end, a law will be need to define the relationship of the parties,” Drilon said in a statement on Sunday.

On October 19, Drilon met with Idun Tvedt and Elisabeth Slattum of the Norwegian Ministry of Foreign Affairs to discuss the peace and reconciliation efforts between the Philippines and the NDFP that the Norwegian government has been helping with.

The senator said Tvedt, the new special envoy to the Philippines on peace and reconciliation efforts with the NDF who is replacing Slattum, is due to arrive to the country Sunday for a two-day trip.

Drilon also expressed his gratitude to the Norwegian government “for supporting the peace negotiations between the Philippines the NDFP.”

“The Philippines is very grateful to the Norwegian government for acting as a third-party facilitator of the peace process between the Philippines and the NDF,” Drilon told Tvedt.

“Right now the peace process with the NDF is not being discussed formally or informally in the Senate,” he added. /je