Last 30 terrorists in Marawi holed up in building 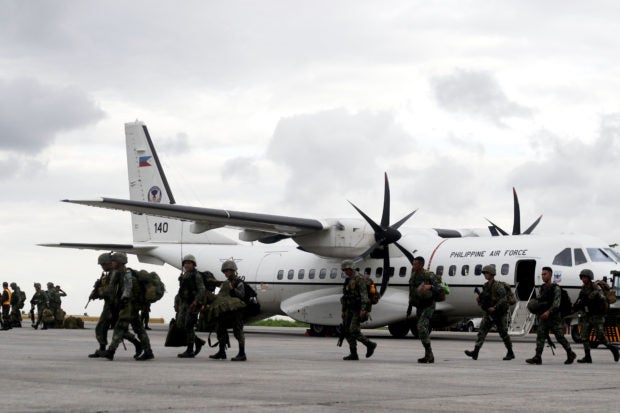 Hundreds of Marines arrive at Villamor Air Base in Pasay City on Saturday, Oct. 21, 2017, after months of fighting in Marawi City. (Photo by RICHARD A. REYES / Philippine Daily Inquirer)

MARAWI CITY — The battle for Marawi was down to the last building on Sunday, with government troops fiercely fighting the remnants of a pro-Islamic State (IS) alliance who were determined to fight to the death, the military said on Saturday.

Col. Romeo Brawner Jr., deputy commander of the task force battling the last of the Maute and Abu Sayyaf terrorists who seized large parts of Marawi five months ago, said the military was trying to bring the fighting to an end by either capturing or killing the last 30 terrorists holed up in a two-story building next to the city’s vast Lake Lanao.

“There’s just one building and they’re inside,” Brawner told a news conference.

“They are in the basement. It’s a commercial building,” he said.

“We believe these are the ones who decided to fight it out, because they believe that if they die there they will go to heaven,” he added.

Brawner estimated that there were 30 people in the building, including family members of the terrorists and five foreign fighters.

“Some of them are foreigners, members of the Maute clan and wives of the fighters,” Brawner said.

Among the foreigners believed to be with the remaining terrorists were Malaysian militant Amin Baco and an Indonesian known only as Qayyim.

Both have plotted attacks and provided combat training to local terrorists for years but have eluded capture in the south.

Brawner said soldiers were using loudspeakers to urge the gunmen to surrender, although the military believed the terrorists were holding no more hostages.

“We believe those who are inside that building [include women] who have chosen to stay with their husbands,” he said.

“We’re trying to convince [the fighters] to release at least the women,” he added.

Brawner said the troops were also trying to spare the child warriors.

He gave assurance that those who would surrender would be “treated humanely.”

He cited the case of a Maute wife who recently came out of the battle zone with some hostages freed by the terrorists.

The Maute-Abu Sayyaf alliance and its foreign allies rampaged across Marawi and seized the city center on May 23 to establish an IS enclave in Southeast Asia.

The government responded with a police-military campaign that has cost the lives of more than 1,000 people, including 897 terrorists, 165 soldiers and policemen, and 47 civilians.

The siege of Marawi has stunned the Philippines and stoked wider concerns that IS loyalists have learned how to thrive in impoverished Muslim areas of Mindanao and use the island’s jungles and mountains as staging posts to launch attacks.

Those fears are compounded by the Marawi terrorists’ ability to recruit young fighters, stockpile huge amounts of arms and endure five months of ground offensive by government troops and airstrikes that have devastated the city.

The military made a significant gain with last week’s killing of the two top leaders of the terrorist alliance—Abu Sayyaf commander Isnilon Hapilon, the IS “emir,” or leader, in Southeast Asia, and Omar Maute, a member of the Maute militant clan of Lanao del Sur province.

Another leader and possible bankroller of the terror operations, Malaysian militant Mahmud Ahmad, was likely killed also, the military said, although his body had not been found.

Brawner said the authorities believed there was now a leadership vacuum in the alliance and the stragglers were running low on ammunition.

The US Embassy in Manila on Sunday said an embassy official “hand carried” the DNA sample taken from the body of Hapilon to the US Federal Bureau of Investigation headquarters in Quantico, Virginia, “for identity verification” on the request of the Philippine military.

The DNA tests confirmed the death of Hapilon, the embassy said in a statement.

“This is yet another example of how the US is supporting our friend, partner and ally in the fight against terror,” the embassy said.

Washington has offered a $5-million bounty for Hapilon, who had been blamed for kidnappings for ransom of American nationals and other terrorist attacks.

The United States and Australia provided surveillance support to the government’s campaign to retake Marawi from the terrorists.

Although fighting was still going on, President Duterte on Tuesday declared Marawi “liberated from terrorists’ influence” and said “that marks the beginning of rehabilitation.”

The government estimates the rebuilding of Marawi could cost at least P50 billion.

The Department of Public Works and Highways (DPWH) aims to finish by next month site development work for the first batch of temporary housing for Marawi residents displaced by the fighting.

“The area being developed by the DPWH in Barangay Sagonsongan, Marawi City, can accommodate 1,100 families. We are doing everything we can to finish it by November,” Public Works Secretary Mark Villar said on Sunday. —With reports from Marlon Ramos, Tina G. Santos, and the wires