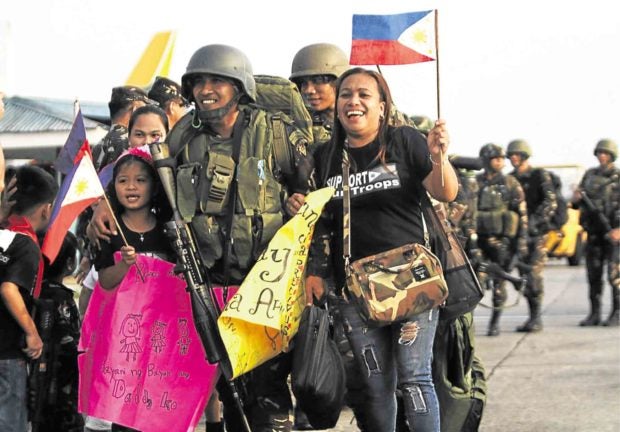 GUN SALUTE The family of a returning soldier welcomes their hero with posters and flags at Villamor Air Base. —RICHARD A. REYES

Despite the start of military pullout in Marawi City, government troops would continue to secure it from Islamic State-inspired forces and ensure safety of its residents, the Malacañang said Saturday.

Presidential Spokesperson Ernesto Abella said the military would continue to guard Marawi City to prevent possible threats of terrorism from returning to the city.

“The start of the military pullout in Marawi does not signal the end of fighting between our troops and Maute terrorist-stragglers,” Abella said in a statement.

“While enemy force has greatly diminished, we will continue to be alert and assure the residents of the city that we will not compromise its security with the presence of some units of the Armed Forces,” he added.

The deaths of Abu Sayyaf leader Isnilon Hapilon and Maute terror group Omarkhayam Maute signaled the end of the war in Marawi City after nearly five months of fighting.

“We cannot afford to drop our guard for possible threats coming from the remaining network of the Daesh-inspired terrorist group still operating as we begin the challenging task of rebuilding, reconstruction and rehabilitation of Marawi,” Abella said. /je