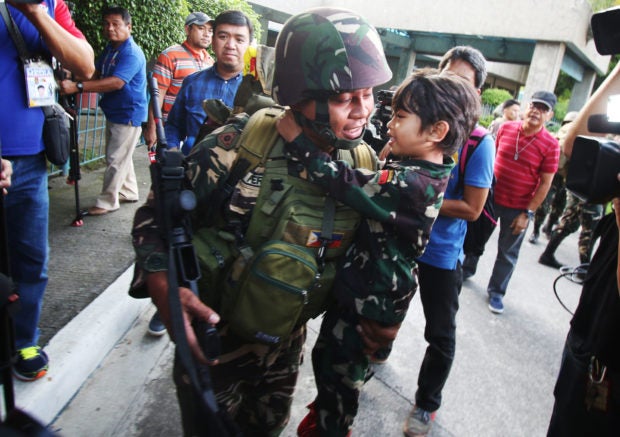 The first batch of Army soldiers to fly to Manila after taking part in one of the bloodiest and longest urban war in Philippine history returned home on Friday at Villamor Air Base.

The 1st Infantry Battalion of the 2nd Infantry Division was one of the first units sent to reinforce soldiers in Marawi City after the war broke out on May 23.

Before flying to Manila, the 1st IB led by Lt. Col. Christopher Tampus was awarded with a Command Plaque in Marawi City by Western Mindanao Command chief Lt. Gen. Carlito Galve. Tampus was also awarded with the Silver Medal Award, along with his three company commanders.

A heroes’ welcome was set by the Philippine Army at Fort Bonifacio in Taguig City.

The couple has two children — Rhayv John and Rhayv Yuan, with ages 6 and 4.

The Western Mindanao Command said the 1st IB is responsible for the rescue of 34 hostages of the members of the Maute Group and the recovery of assorted high powered and low powered firearms.

Marawi City was declared liberated from terrorists on Tuesday, a day after top leaders Isnilon Hapilon and Omar Maute were killed by government forces.

While military operations continue, the military said the less than 30 remaining terrorists are no longer a threat.