Duterte gives special thanks to China in Marawi crisis 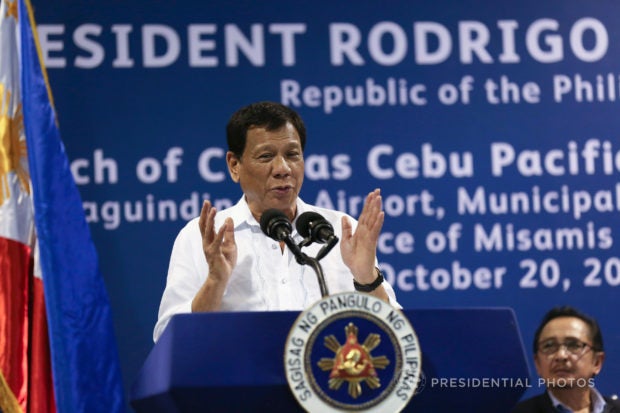 President Duterte has thanked the United States, China and Israel for their help in fighting pro-Islamic State (IS) militants in Marawi City, expressing special appreciation to Beijing for its assistance early in the conflict.

“It was only China who gave it on time and plenty, plenty,” Mr. Duterte said in a speech at the 43rd Philippine Business Conference that was attended by Chinese Ambassador Zhao Jianhua.

Mr. Duterte declared the liberation of Marawi on Tuesday, a day after troops killed Isnilon Hapilon, the “emir” of the IS group in Southeast Asia, and Omar Maute, a leader of the Maute group that laid siege to Marawi on May 23 with Hapilon’s Abu Sayyaf faction.

“I would like to officially inform you, Ambassador Zhao, that the rifle that killed Hapilon was a sniper rifle made in China,” he said.

The military has yet to confirm if a China-made rifle was used to shoot Hapilon.

In June, the Philippines received Chinese-made assault and sniper rifles worth P370 million. Another shipment of rifles and ammunition donated by China arrived early this month.

The June and the October shipments were given to the Philippine National Police, except for the sniper rifles which went to the military.

The President failed to mention assistance from Australia, one of the Philippines’ military allies, which flew surveillance flights over the Marawi war zone along with US spy planes.

He said the Americans and the Israelis only allowed Filipino troops to use their equipment without leaving them behind.

“They are not willing to give it to us unlike China—no payment,” he said. “The thought of helping us was something that was useful to the community of the world.”

Unlike his predecessor, Mr. Duterte has warmed up ties with China. He said early in his administration he would lean more toward China and Russia than to the US, the Philippines’ security treaty ally.