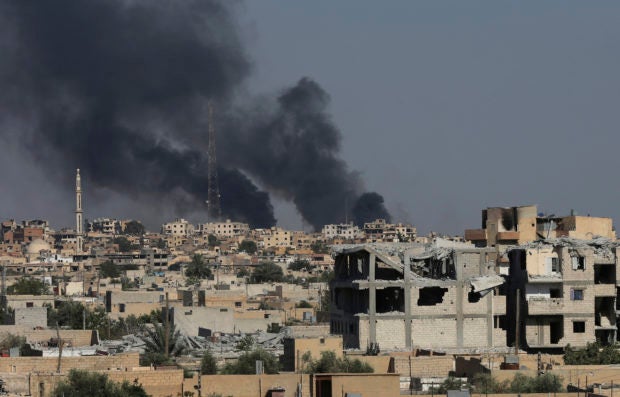 FILE- Black smoke rises from Raqqa city where U.S.-backed Syrian Democratic Forces fighters battle against the Islamic State militants, in Raqqa, northeast Syria, Thursday, July 27, 2017. U.S.-backed Syrian fighters have captured almost half of the Islamic State group’s de facto capital of Raqqa, but the push into the city in northern Syria has slowed due to stiff resistance and large amounts of explosives planted by the extremists, a spokeswoman for the fighters and monitors said Thursday. (AP Photo/Hussein Malla)

BEIRUT – A US-backed Syrian force has declared victory over the Islamic State group in its former “capital” of Raqqa, declaring the city free of any extremist presence.

At a press conference held inside the city Friday, the Kurdish-led force known as the Syrian Democratic Forces formally handed over administration of the city in northern Syria to a council made up of local officials and tribal leaders.

“Our victory is one against terrorism,” said Talal Sillo, a spokesman and senior SDF commander.

The press conference was held inside the city’s sports stadium which Islamic State militants had turned into a huge prison where they incarcerated and tortured their opponents.