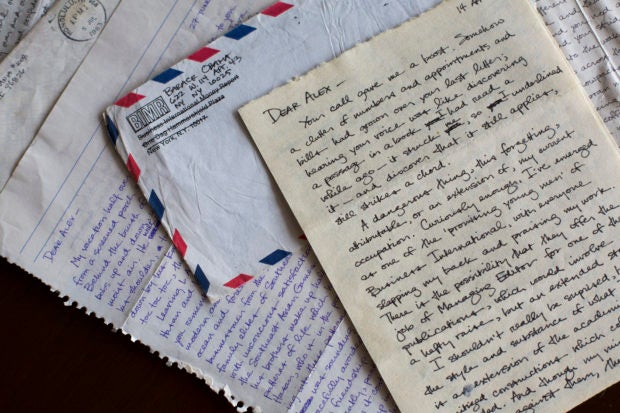 This image provided by Emory University shows letters sent by future President Barack Obama to his college girlfriend Alexandra McNear and held by Emory University’s Stuart A. Rose Manuscript, Archives and Rare Book Library in Atlanta. The university is making the letters available to researchers on Oct. 19, 2017. (Ann Borden/Emory University via AP)

WASHINGTON — A young Barack Obama questioned his place in the world and his racial identity, agonized over whether he’d make enough money as a community organizer, and lamented his incompatibility with his ex-girlfriend in 30 pages of letters he wrote to her that are now being archived by Emory University in Atlanta.

The nine full letters, sent by Obama to his college girlfriend, Alexandra McNear, are being made public to researchers through Emory University’s Stuart A. Rose Manuscript, Archives and Rare Book Library. The university has had the letters since 2014 but could only make them public now, officials said.

Written in the 1980s, the letters give a peek into Obama’s psyche as he sought out the path that would eventually land him in the White House as the United States’ first black president, Emory University officials said Wednesday.

“My ideas aren’t as crystallized as they were while in school, but they have an immediacy and weight that may be more useful if and when I’m less observer and more participant,” Obama wrote in 1984 to McNear, who was a student at a California college attended by Obama had attended before moving to Columbia.

The “very lyrical, very poetic” letters will be useful to researchers trying to craft a picture of Obama the college student and recent graduate, Emory officials said. Parts of the letters from Obama have already appeared in books about Obama over the last few years.

“They tell the journey of a young man who is seeking meaning and purpose in life and direction,” said Rosemary Magee, the Rose Library director. Obama is “trying to find what his distinctive place would be both in that time and going forward.”

The letters span 1982 to 1984. During that time, Obama was at Columbia University in New York City, in Indonesia, and finally working at Business International Corporation, “with everyone slapping my back,” in a job for which he had no passion.  Obama wrote for the newsletter Business International Money Report.

“Salaries in the community organizations are too low to survive on right now, so I hope to work in some more conventional capacity for a year, allowing me to store up enough nuts to pursue those interests next,” Obama wrote in 1983. 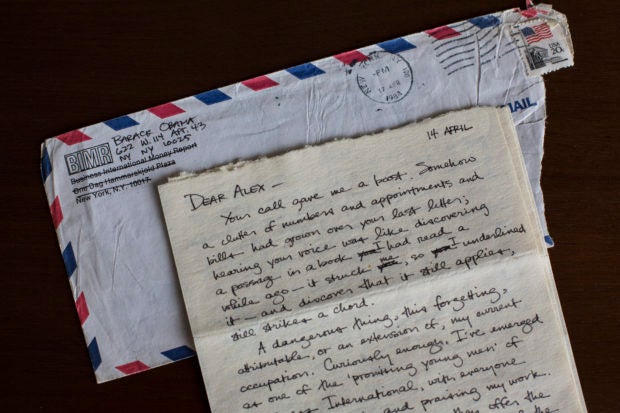 This image provided by Emory University shows letters sent by future President Barack Obama to his college girlfriend Alexandra McNear and held by Emory University’s Stuart A. Rose Manuscript, Archives and Rare Book Library in Atlanta. The university is making the letters available to researchers on Oct. 19, 2017. (Ann Borden/Emory University via AP)

The future president’s letters were penned in a combination of careful cursive and “Dear Alex” in print. He wrote them on stationery as well as ripped-out yellow and white, college-ruled notebook paper. At least one was sent in Business International Money Report envelopes with the business’s address crossed out and “Barack Obama” written above it.

Emory University professor Andra Gillispie, director of Emory’s James Weldon Johnson Institute for the Study of Race and Difference, is using the letters in an upcoming book about Obama. She said the letters are not overly romantic as they span the end of the pair’s relationship.

“I think of you often, though I stay confused about my feelings,” Obama wrote to McNear in 1983. “It seems we will ever want what we cannot have; that’s what binds us; that’s what keeps us apart.”

But the letters aren’t all angst, Gillispie said. Obama — “clearly a person of the mind,” she said, — once ripped out a New York Times book review of Rachel M. Brownstein’s book, “Becoming a Heroine” and sent it McNear, something that amused the professor.

“This is part of his courtship strategy. Okay … Who rips out book reviews to send to their girlfriend?” Gillispie laughed. “I think it is a sign of his proto-feminism but it is -more of a ‘Wow, this is really cerebral relationship’ but I personally like the idea of a cerebral relationship. I’m a nerd too, so the nerd in me was like, ‘That was real cool.'”