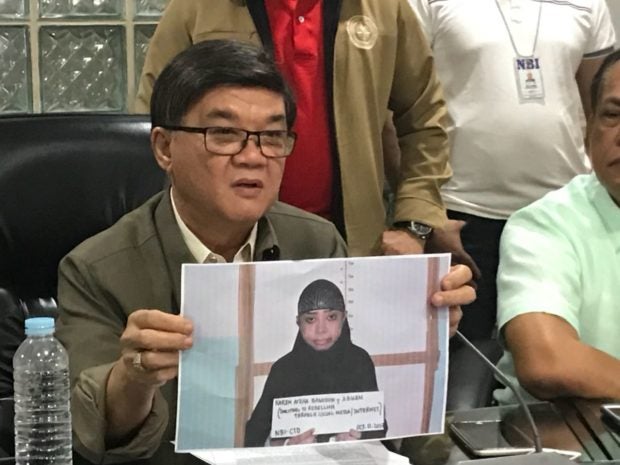 The National Bureau of Investigation (NBI) has filed a complaint before the Department of Justice (DOJ) against a woman suspected of using the internet and social media to spread Islamist extremist propaganda and recruit foreign fighters to sow terror in the Philippines.

The NBI filed 14 counts of inciting to rebellion complaints against Karen Aizha Hamidon, 36, for violating Article 318 of the Revised Penal Code and Section 6 of R.A. 10175 or the Cybercrime Prevention Act.

Hamidon was the wife of the late terror leader, Mohammad Jaafar Maguid, and ex-wife of another extremist Singaporean Muhammad Shamin Mohammed Sidek, who was closely linked to the Islamic State.

Hamidon was arrested on October 11, 2017, in her home in Taguig City by operatives of the NBI Counter Terrorism Division (NBI-CTD) through a search warrant.

In a press conference at the NBI office in Manila on Wednesday, Justice Secretary Vitaliano Aguirre II said Hamidon may also be charged with rebellion for conspiring with her former lovers to sow terror in the Philippines, particularly in Marawi City.

“I believe that although she was not fighting, maybe ISIS or Maute group in Marawi, the action of the subject clearly denote that she was in conspiracy with the rebels. So in my opinion she should be charged not only of inciting to rebellion but of the crime of rebellion itself,” Aguirre said.

To prove conspiracy under the law, the secretary said, there should be an agreement to commit the crime to rebel and rebellion was executed.

“Even there is no proof of actual conspiracy if, from the acts of the parties, you could deduce that there was the same design, the same purpose that would be proved of the agreement, and so I believe that she is part and parcel of this rebellion happening still in Marawi City,” he added.

Aguirre said that the NBI-CTD had been tracking Hamidon’s movements and her activities “years” before the Marawi City siege erupted in May. However, he did not say if the authorities found that Hamidon’s activities were in any way connected to the Marawi clashes.

“Actually tuluy-tuloy ang investigation. It is still premature for us to (disclose this)… because they haven’t finished the investigation,” he said.

Hamidon is currently detained at the NBI Custodial Center in Manila. /jpv