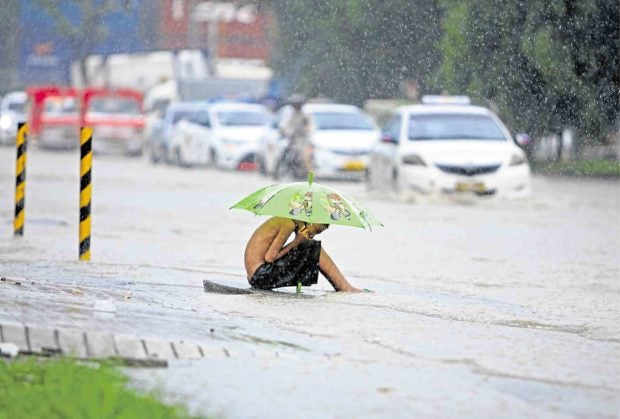 WAITING IN VAIN A boy endures heavy rains as he waits for people who will rent his umbrella along the flooded Kaoshiung Street in Cebu City’s North Reclamation Area. LITO TECSON/CEBU DAILY NEWS

CEBU CITY — Within 20 minutes of heavy rains, floodwater could reach knee-deep in downtown Cebu City. This is what locals call the “new normal” in the city.

But flood control programs are taking the backseat in the proposed 2018 budget of the city government, an opposition councilor said recently.

Under the proposed P6.3-billion budget for next year, the maintenance of drainage and flood control program got only P3.5 million while P4 million was set aside for supplies and material expense. Budget allocation for flood control makes up around 0.48 percent of the total proposed annual budget for 2018.

Another P23.3 million worth of flood control systems in different villages had been allocated under the city’s Local Development Fund.

In contrast, garbage collection and other related activities were given a whopping P381.9 million.

The bulk of the budget for garbage collection—P313 million—was set aside for the city’s garbage hauling services.

In an interview, he said Cebu City Mayor Tomas Osmeña used to criticize his predecessor, former Mayor Michael Rama, for spending too much on garbage disposal.

Yet, he added, Osmeña was repeating what Rama did.

Garganera used to head the council’s committee on environment which, in 2016, spent only P37.3 million for garbage collection and disposal.

In 2017, after Osmeña took over, the city spent about P313 million for private haulers’ services. The city proposed the same amount for next year.

But Garganera said Osmeña was not taking serious steps in addressing flooding and drainage problems in the city.

Other proposals by the Department of Public Services include rental of heavy and other equipment (P65.4 million), supplies and materials for sanitation (P2.5 million), and repair and maintenance for landfill equipment (P1 million).

The total amount for garbage-related expenses is roughly 6 percent of the annual budget proposal of the city.

Osmeña said the city was spending on hauling services because his priority was to
implement an effective garbage collection.

He said buying garbage trucks might show lower budgetary appropriation but the city would have to spend on maintenance.

The city is leasing 21 trucks from Pasajero Motors Corp. at a rate of P700 per hour. This is on top of the city’s contract with Jomara Konstruckt Corp., which hauls the city’s garbage to a private landfill in Consolacion town in Cebu province at P1,296 per ton.

Still, Osmeña maintained that the current setup was more advantageous to the city.