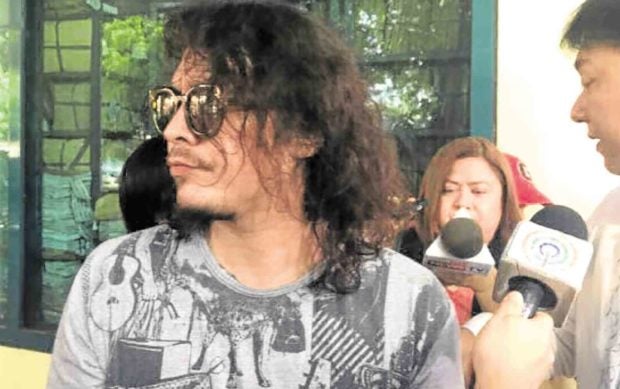 Controversial actor Baron Geisler was charged with unjust vexation and alarm and scandal after allegedly causing a disturbance at a restaurant-bar in Quezon City on Monday night.

Assistant City Prosecutor Marizen Grutas on Tuesday said there was probable cause to file the charges against Geisler, 35, “considering the respondent was actually seen by the complainant committing the acts” at TGI Fridays on Tomas Morato.

Lawyer Jay Sangalang, the actor’s lawyer, said Geisler was supposed to post bail of P4,000. But, the actor remained in detention at the Kamuning police station at press time since Malacañang had ordered the suspension of work in government offices nationwide due to a jeepney strike.

A report to Chief Supt. Guillermo Eleazar, Quezon City Police District director, said TGI Fridays management earlier banned Geisler from its branches due to his “unruly behavior,” especially when under the influence of alcohol.

But around 6 p.m. on Monday, the actor showed up at the Tomas Morato branch, the report added. Out of courtesy, he was allowed to enter the place since he looked calm and sober.

The trouble started after Geisler allegedly shouted and swore at two male customers without any provocation.

When a security guard tried to pacify him, the actor challenged him to a fistfight. This prompted the establishment to call the police, who later arrested Geisler.

According to the QCPD, Geisler has another standing arrest warrant for smoking inside a plane in violation of the Civil Aviation Authority Act.

The warrant was issued by the Lapu-Lapu City Municipal Trial Court Branch 3 on July 28. Sangalang said Geisler would also post bail of P6,000 for this case.

Donald David Geisler III, the actor’s older brother and a two-time taekwondo Olympian, apologized for Baron’s behavior and said the family would discuss whether he should seek professional help for his problems, particularly with alcohol.