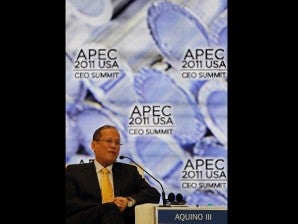 HONOLULU—Former President Gloria Macapagal-Arroyo herself is responsible for the Department of Justice circular that is now preventing her from leaving the country for medical treatment abroad, President Benigno Aquino III told reporters on Saturday evening here (Sunday in Manila).

Asked to comment on the alleged plan of Arroyo’s allies to have him impeached for his supposed violation of her right to travel, Mr. Aquino said they should look to file something against her first if it’s with regard to Memorandum Circular No. 41.

“They should start filing against Mrs. Arroyo, who was the proponent of MC 41 that we are citing. It was her secretary of justice that came out with this,” the President told reporters in an informal chat following his Apec-related activities and bilateral meetings.

Asked if he was confident that nothing would come of an impeachment complaint that may be filed against him, Mr. Aquino declined to directly answer the question, saying that he’d sound too proud.

“For me, I think about the concept in government called presumption of regularity. What’s being accused? I prevented her from traveling. First of all, I was not the one that came out with the travel order but my alter ego,” President Aquino said.

“But more than that, what’s the basis for the no-watch list order? It’s Memorandum Circular 41 that her secretary of justice came up with. So why should I be blamed for being unconstitutional when I did nothing (with regard to MC 41),” he said.

On the Dominican Republic’s denial that there was a request for asylum from the Arroyos, President Aquino said, “I asked, the secretary of foreign affairs is with me and I also asked the secretary of justice to verify that as far as possible, to inquire exactly what transpired.”

“There’s an allegation that there was this dinner, there were certain things that happened and I think it was prudent of the executive to explore all of these things. Now, what actually is the result of the investigation? I have yet to receive it,” he added.

The President also said that it was up to the courts to determine whether Arroyo should be placed under house arrest or hospital arrest.

In Manila, Vice President Jejomar Binay voiced suspicious about Arroyo’s preference for medical treatment in countries with no extradition treaty with the Philippines.

“I am just wondering why all the countries she wants to go to have no extradition treaty with us,” Binay said, adding that medical experts here would be able to treat her.

“Not just one, not two, not three (countries). All of the countries she wants to go to have no existing extradition treaty. Things like this raise questions on whether she should be allowed to leave or not,” he said.

He pointed out that the justice secretary’s disclosure of the Arroyos’ alleged plan to seek asylum in the Dominican Republic was a trivial matter.

De Lima on Monday said the government was checking on the real purpose of the recent visit of a senior Dominican Republic diplomat to the former president.

“I’m still confirming the actual purpose of the visit. I’m not trying to create something here. I’m just trying to justify my act of verifying (that information). Nobody can fault me for that,” she said.

She told reporters that she would ask the Department of Foreign Affairs to “verify” the reason for Hans Dannenberg Castellanos’ trip to the Philippines from October 25 to 28 this year.

“I’ll ask the advice of the DFA. I suppose that since (Castellanos) is a senior officer in the diplomatic circle, his visit, whether official or personal, should have been coordinated with the DFA,” De Lima said. With reports from Jeannette I. Andrade and Marlon Ramos