Drivers in protest: Costly modernization to drive us to unemployment 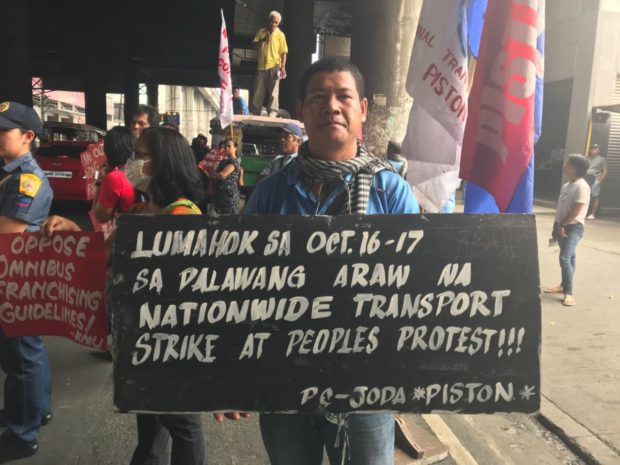 Driver Ruel Obligar, 42, said he would continue to protest against the looming jeepney modernization plan despite the government’s pronouncement that it would still implement the upgrade program despite opposition from transport sector. (INQUIRER.net / Jhoanna Ballaran)

Jeepney drivers and operators have vowed to continue their fight against the impending jeepney modernization plan even as Malacañang stood firm on implementing the upgrade of what had long been touted as the country’s “King of the Road”.

Ruel Obligar, 42, said joining the two-day transport strike is nothing compared to forever losing his livelihood that feeds his family of five.

(This is my livelihood so I am against the proposed phase out plan.)

(This strike is just for two days. This is nothing compared to the lifetime of joblessness.)

Obligar joined the transport strike as early as 12 a.m. on Monday to express his strong opposition to the jeepney modernization plan. He has been a jeepney driver for 24 years and currently plying the Vito Cruz-Cubao route.

Like any jeepney driver, Obligar said he could not afford the P1.8 million cost of the public utility vehicle under the proposed jeepney upgrading scheme, which would be implemented via the Land Transportation Franchising and Regulatory Board’s (LTFRB) Omnibus Franchising Guidelines (OFG).

Protesting drivers believed that if the government would insist, the jeepney modernization plan could drive 600,000 jeepney drivers and 300,000 operators into unemployment.

The government’s modernization plan is seen to phase out jeepneys that are more than 15 years old, and usher in electrically-powered jeepneys with solar roofs.

Piston national president George San Mateo explained that his group is not against the modernization, but was only criticizing the prevailing scheme, which they deemed as “unjust” for the jeepney drivers and operators.

Piston has been pushing for the cheaper alternative of rehabilitation for jeepneys and a nationalized, efficient, and mass transportation system.

He said that instead of importing materials for the proposed new jeepneys, the government should ask foreign investors to build local plants to manufacture the vehicles.

(Build local plants and give incentives to these manufacturing plants so that what they produce would be bought in cheaper prices.)

San Mateo assailed the administration for “forcing” the scheme, saying President Rodrigo Duterte is no different from his predecessor.

Read Next
Search on for 2 missing workers at El Nido
EDITORS' PICK
10 Filipinos positive for COVID-19 in UK, 7 in Ireland — envoy
Nograles: Cabinet members to donate 75% of monthly salary to aid COVID-19 fight
Quick chat with Nicole Andersson: ‘You really don’t need much to be happy’
IATF to LGUs: Issue ordinances vs attacks on frontliners, COVID-19 patients
Diokno to Duterte: OK to make fun of buck tooth, but focus on people’s needs first
Robredo spox thanks Duterte for defending VP’s efforts vs COVID-19
MOST READ
Coronavirus hotbed Rizal to shut borders on April 6
Gov’t mulling quarantine period extension of 15-20 more days
ADB warns PH against prolonged lockdown
Sotto on Isko Moreno’s call: We do our job without the media following our every move
Don't miss out on the latest news and information.