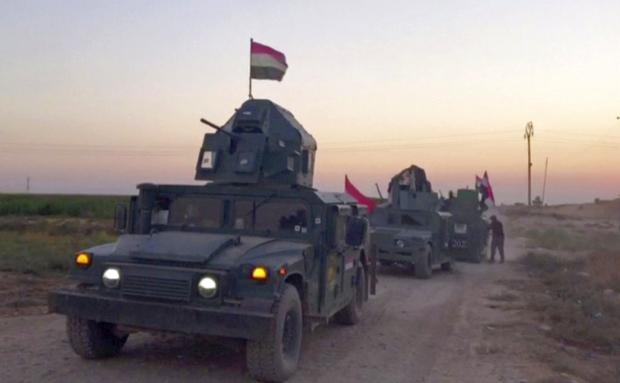 This image made from a video shows Iraqi soldiers on military vehicles in the Qatash area towards Kirkuk gas plant, south of Kirkuk, Iraq, Monday, Oct. 16, 2017. Iraqi state media say federal troops have entered disputed territories occupied by the nation’s Kurds. The move comes three years after Kurdish militias seized the areas outside their autonomous region to defend against an advance by the Islamic State extremist group. (Photo from APTN via AP)

Kurdish forces appeared to be pulling back, abandoning fortified positions around the airport as large numbers of civilians fled the northern city ahead of a feared assault. The multi-ethnic city, home to some 1 million Arabs, Kurds, Turkmen and Christians, is claimed by autonomous Kurdish authorities as well as the central government in Baghdad.

The conflict pits two close US allies against each other, potentially undermining the unfinished war against the Islamic State group.

The Kurdistan Region Security Council said in a statement that the Kurdish forces, known as the peshmerga, destroyed at least five US-supplied Humvees being used by Iraq’s state-sanctioned militias following the “unprovoked attack” south of the city.

Brig. Gen. Bahzad Ahmed, a spokesman for Kurdish forces, said federal forces have seized an oil and gas company and other industrial areas south of Kirkuk in fighting with Kurdish forces that caused “lots of casualties,” without providing a specific figure.

He said Iraqi forces have “burnt lots of houses and killed many people” in Toz Khormato and Daquq, south of the disputed city. His claims could not be independently verified.

Iraq’s Interior Ministry said in a brief statement that federal forces have taken control of a power plant, a police station and industrial areas near Kirkuk. It provided no further details on the fighting or casualties in what it referred to as Operation Impose Security on Kirkuk.

Tensions have soared since the Kurds held a non-binding referendum last month in which they voted for independence from Iraq. The central government, along with neighboring Turkey and Iran, rejected the vote.

The United States has supplied and trained Iraqi federal forces and the peshmerga, both of which are fighting the Islamic State group. The US also opposed the referendum, and has urged both sides to remain focused on defeating the extremists.

US Army Col. Ryan Dillon, a spokesman for the US-led coalition, tweeted that it was “closely monitoring sit. near Kirkuk; urge all sides to avoid escalatory actions. Finish the fight vs. #ISIS, biggest threat to all.” ISIS is another acronym for the Islamic State group.

The central government and the autonomous Kurdish region in the north have long been divided over oil revenues and the fate of disputed territories like Kirkuk that are controlled by Kurdish forces but are outside their self-ruled region.

The Kurds assumed control of Kirkuk, in the heart of a major oil-producing region, in the summer of 2014, when IS militants swept across northern Iraq and the country’s armed forces crumbled.

Iraq has since rebuilt its armed forces with considerable U.S. aid, and they are battle-hardened and flush with victory after driving IS from most of the territory it once held. Fighting alongside the armed forces are tens of thousands of state-sanctioned militiamen, mainly Shiite Arab fighters backed by Iran, whom the Kurds view as an instrument of demographic change.

Prime Minister Haider al-Abadi had vowed that the militias, known as the Popular Mobilization Forces, would remain outside the city, but an Associated Press reporter saw them taking up posts that had been abandoned by Kurdish forces in western Kirkuk.

The Kurdish security council said the assault launched late Sunday was aimed at entering the city and retaking the K-1 military base and nearby oil fields.

State-run Al-Iraqiya TV had earlier reported that federal forces rolled into parts of the countryside outside Kirkuk without facing resistance. However, some residents of the city and an Iraqi militia commander reported shelling.

Al-Iraqiya carried a statement from al-Abadi’s office saying he had ordered federal forces to “impose security in the city in cooperation with the inhabitants and the peshmerga,” indicating he was willing to share administration.

A commander of the local Kurdish police force said his forces remained in control of the province’s disputed oil wells. “There’s been no agreement to hand over the wells until now. As for the future, I don’t know,” said Bahja Ahmad Amin.

Ercuman Turkman, a PMF commander, said shortly before forces began moving in that he expected orders to move on Kirkuk’s oil wells, its airport and the nearby K-1 military base, but not the city. Haytham Hashem, another PMF commander, reported shelling on his position in Toz Khormato, 10 kilometers (6 miles) from the edge of Kirkuk city.

Baghdad has been turning the screws on the Kurdish region since the September referendum, pushing Kurd leaders to disavow the vote and accept shared administration over Kirkuk.

Iraq’s government barred international flights to and from the region and asked neighboring Turkey and Iran to close their borders. Iran closed its three official crossings with the Kurdish region Sunday, Kurdish media reported. It also froze currency transfers to four banks operating in the Kurdish region.

Al-Abadi has demanded shared administration over Kirkuk. His Cabinet said Sunday that fighters from Turkey’s Kurdish insurgency, the PKK, were beginning to appear in Kirkuk, and declared that would be tantamount to an act of war.