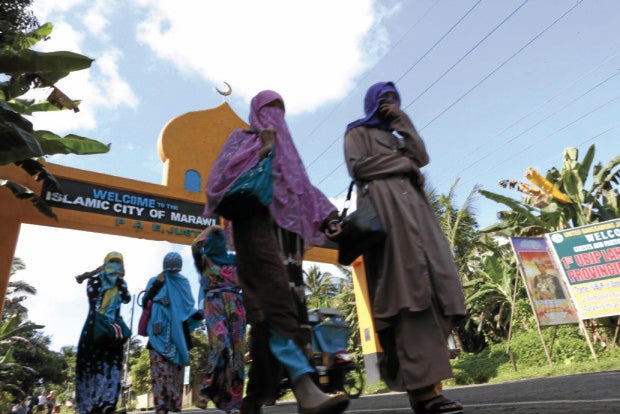 Aga Khan Sharief, who had been talking with militants inside the main battle area in a bid to secure the release of hostages, also confirmed the killing of Hapilon and Omar.

“We prayed that these leaders will be killed. I am happy that they are dead,” she told the Inquirer.

Ampaso said she expected more good news to come in, following the deaths of the two leaders of the Islamic State-inspired group, which has been in clash with government forces in this city for around five months now.

“I hoped that their deaths would mean the end of the war and we can return to our homes already,” she added.

Nafisa Dimaro, 24, whose house was among those damaged in the airstrikes in Barangay Raya Madaya, said Hapilon and Omar did not die in the way of Allah.

“Their souls will not enter heaven. They caused so much destruction. My children suffered a lot because of what they did,” Dimaro said.

In Zamboanga City, Chinaline Tamboon said she cannot describe her happiness upon learning about the death of Maute and Hapilon.

Chinaline is the widow of Marine Sergeant Brian Tamboon, a sniper who was killed in Marawi on June 29.

“I can’t explain my happiness. At least the war is going to end real soon and justice is attained for all the troops who sacrificed – killed like my husband and hundreds more who were wounded,” Chinaline told the Inquirer.

Zia Alonto Adiong, the spokesperson of the Lanao del Sur crisis management committee, said the death of Maute and Hapilon indicated that the war could be coming to an end.

“We are very happy. This is what we are waiting for. This is an indication that the war is over,” Adiong said.

For Autonomous Region in Muslim Mindanao (ARMM) Governor Mujiv Hataman, the reported death of Omar and Hapilon “marks the end of the siege in Marawi.”

But Hataman said “it also marks the beginning of a long but necessary process of healing and recovery among our people.”

Presidential Spokesperson Ernesto Abella said in a statement that the initial report from the military indicated that the two terror leaders were killed as troops moved in early morning Monday.

Lorenzana said the operation that killed the two militant leaders was based on information provided by a female hostage, who had earlier escaped the main battle area.

He said that early morning on Monday, soldiers assaulted the building where the two militant leaders were supposedly hiding and killed them there.

But Sharief said that he received word that the two leaders had been killed “about three days ago.”

Sharief said the information was provided to him by his contact inside the main battle area.

Meanwhile, a member of the police’s Scene of the Crime Operations (Soco) said they managed to lift fingerprints from Hapilon and Maute.

According to him, the fact that fingerprints had been taken from Hapilon and Omar meant that these were fresh, “not more than a day old.”

Col. Romeo Brawner Jr., the deputy commander of the Joint Task Force Ranao, was mum on the deaths of the two siege leaders.

Brawner said what he can only confirm was the rescue of 17 hostages – including women and children – during troops’ assault towards midnight on Sunday.

Brawner said the rescued hostages were still resting and will soon be processed by the police’s Criminal Investigation and Detection Group (CIDG).

“We haven’t asked them anything yet so they could rest first,” Brawner said.

But he could not say how many hostages remained in the hands of the gunmen. The fresh rescue brought to 38 the total number of hostages plucked out of the war zone this month alone.

Even after news of Hapilon and Omar’s death had already been confirmed, explosions from Howitzers and occasional automatic rifle fires can still be heard inside the main battle area.

Sharief said he believed the war would not last long anymore and had expected the remaining gunmen, who were now without leaders, to yield.

Lorenzana and Abella said mopping up operations was still underway and that the government could still not absolutely say if the war will be over very soon.

“We will also announce the termination of hostilities once government troops have ensured that the remaining terrorists holed up in the city are neutralized or captured and that they have cleared all structures of improvised explosive devices (IEDs) and other traps,” Abella said.

“We will announce the termination of hostilities in a couple of days,” Lorenzana said.

The killing of Hapilon was being considered as a big blow to the emerging Daesh movement in the Philippines.

The Basilan-based Abu Sayyaf leader, who had a $5 million reward on his head from Washington, had been appointed by the Islamic State as its emir or leader for the Philippines.

Hapilon was among the most elusive Abu Sayyaf leaders and had outlived many second generation bandit leaders.