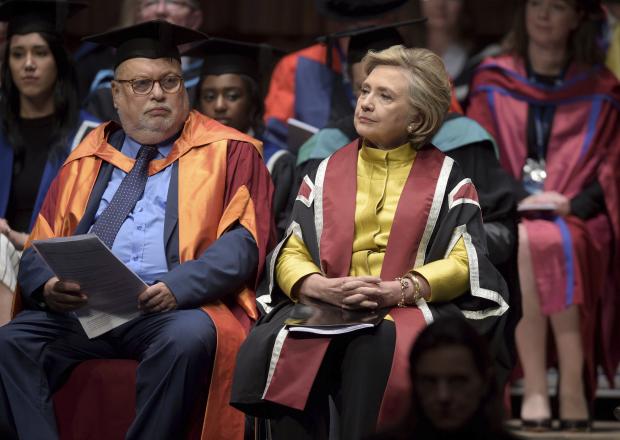 US politician Hillary Rodham Clinton (right) sits in the Great Hall at Swansea University, prior to receiving an Honorary Doctorate in recognition of her commitment to promoting the rights of families and children around the world, in Swansea, Wales, Saturday, Oct. 14, 2017. (Photo by BEN BIRCHALL / PA via AP)

WASHINGTON — Hillary Clinton says President Donald Trump’s threat to pull out of the Iran nuclear accord is “dangerous,” and she suggests her former campaign opponent is undermining the validity of the United States’ promises to other nations.

Trump on Friday accused Iran of violating the landmark 2015 accord, blaming the Iranians for a litany of sinister behavior and hitting their main military wing with anti-terror penalties. Trump, breaking his campaign pledge to rip up the agreement, did not pull the US out or reimpose nuclear sanctions, though he left that option on the table.

Clinton, in an interview recorded Wednesday and set to air Sunday on CNN, said Trump’s insistence on decertifying the deal, even though evidence has pointed to Iranian compliance, “makes us look foolish and small and plays right into Iranian hands.”

“That is bad not just on the merits for this particular situation, but it sends a message across the globe that America’s word is not good,” said Clinton, who spoke in advance of Trump’s announcement two days later. “We have different presidents, and this particular president is, I think, upending the kind of trust and credibility of the United States’ position and negotiation that is imperative to maintain.”

Clinton, who as secretary of state for President Barack Obama began negotiations on the deal, did say Iran is engaging in other dangerous behavior. For now, Trump is tossing the issue to Congress and the other nations in the accord, telling lawmakers to toughen the law that governs US participation and calling on the other parties to fix a series of deficiencies. Those include the scheduled expiration of key restrictions under “sunset provisions” that begin to kick in in 2025, as well as the omission of provisions on ballistic missile testing and terrorism.

“We will now have an arms race – a nuclear arms race in East Asia,” Clinton predicted. “We will have the Japanese, who understandably are worried with missiles flying over them as the North Koreans have done, that they can’t count on America.”

She stressed that a diplomatic solution was preferred, suggested the inflammatory rhetoric played into Kim Jung Un’s hands and bemoaned Trump’s public undercutting of Secretary of State Rex Tillerson when he tweeted “Save your energy, Rex” after the nation’s top diplomat had suggested negotiations.

“Diplomacy, preventing war, creating some deterrents is slow, hard-going, difficult work,” said Clinton, who declined to answer when asked whether Tillerson should resign. “And you can’t have impulsive people or ideological people who basically say, ’Well, we’re done with you.’”

Clinton, who recently released a book that recounts her election defeat to Trump, has been an aggressive critic of the president. The White House did not immediately return a request to respond to her comments.