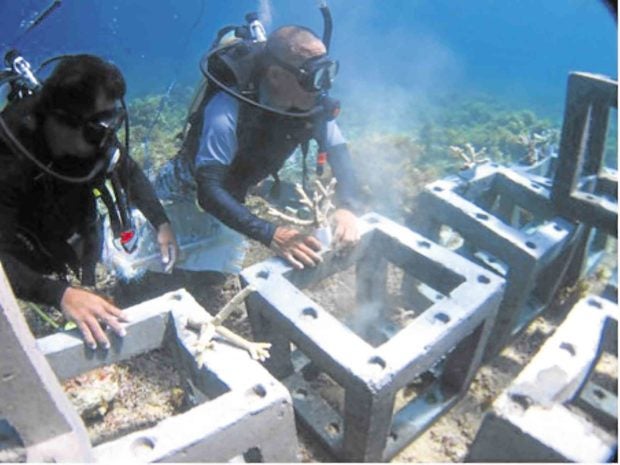 Just a hundred meters from the shoreline of Hinatuan beach in Surigao del Sur lies a future tourist attraction being built by an unexpected group — a coastal resource management team working for Nickel Asia Corp. (NAC), the largest nickel producer in the country.

Hinatuan, according to the group, might have a healthy marine life but artificial coral reefs using concrete modules could help improve its biodiversity.

“We want to disprove (the perception) that mining companies are all about destroying the environment. Even though there’s a mining site near this area, we want to show that we can preserve and even improve marine life here,” said Michael Arlan, an environment specialist of Hinatuan Mining Corp. (HMC), a NAC subsidiary.

Using concrete modules was an idea that HMC adapted from the Department of Environment and Natural Resources’ SCREMP, or Sustainable Coral Reef Ecosystem Management Program, which conducts an ecosystem-based approach in protecting and rehabilitating coral reefs all over the country.

HMC’s marine biologist Phoebe Gayanelo-Alac said the group decided to veer away from the old practice of using tires as artificial reefs as it was proven to be unsustainable.

Despite reservations from two marine advocacy organizations, results of this project launched in 2015 have been encouraging. Already, the barren area around the artificial reef has become home to 32 species of fish including damselfish, butterfly fish, lizardfish, thread fin beams, rabbitfish, cardinal fish and lion fish. Various kinds of algae have also been spotted growing in the reef, along with invertebrates like mollusks, sea urchins and sea stars.

In February, an ocular monitoring by the team showed that the reef houses a juvenile Tridacna sp., or giant clam. The endangered marine creature is native to the shallow coral reefs of the Indian Ocean and the Pacific.

Hard to believe, considering how the reef is just 432 meters away from an active mine pit.

The 40-centimeter-square concrete modules were installed with the help of divers in different areas of the seabed. Each module has 16 depression holes on the top where coral fragments would eventually be transplanted.

“We chose locations that are shallow enough for the corals to be hit by sunlight, but at the same time are not too vulnerable to strong currents. Initially, these sites had only 0 to 5 percent coral cover,” Alac said.

The 150 coral fragments planted in each module were taken from healthy donor corals known as Acropora sp., which are known to grow quickly and are also found in other parts of Hinatuan.

Divers monitor and survey the complexes  monthly to check for any damage or to record any new species living in the area.

A year after the first two installations, 90 percent of the transplanted corals flourished, and 157 new coral colonies were seen encrusted on the concrete module’s  surfaces. 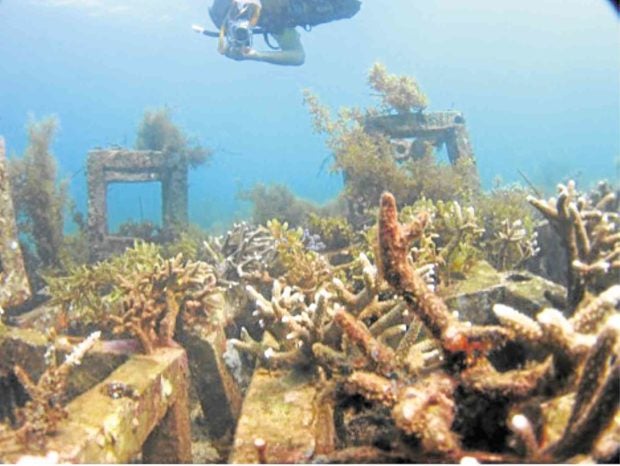 FLOURISHING A year and a half after transplantation, new coral colonies are seen attached to the coral reefs.

The success of the project has doubled to 12 the members of the HMC coastal management team, who foresee more reef installments in the pipeline. Hopefully, the team said, the reef complexes would eventually be declared by the local government as a new marine sanctuary.

“It is slowly becoming a tourist destination here in Surigao though only a few people know about it,” Arlan said. “That is really our goal—to give back to the community and prove that mining can be sustainable and responsible,” he added.

But the Best Alternatives Campaign organization, expressed reservations about the project, noting that artificial reef modules can do more bad than good.

“A potential problem is for the new artificial reefs, which invariably attract fish, to become new fishing sites,” he added.

According Best Alternatives, artificial reef sites should sit inside “no-take zones,” where fishers will never be allowed to catch fish in or near the area. The site could then become a refuge for fish and other marine life.

“The biological spillover effects should be enough to keep the nets of local fishers full and brimming,” Yan said.

Arlan, who has worked closely with fisherfolk from the province, said the area would remain a no-fishing zone though much depends on members of their host community in Barangay Talavera who must make sure that the reefs remained protected.

Training the community is a start.

Take the case of community settler Rolando Eviota whose training under a professional scuba diver employed by HMC would help him monitor the reefs in Talavera.

“We don’t mind looking after the reefs because we know this is a source of livelihood for us. It would be stupid of us to destroy it,” he said.

Other than this training, HMC has facilitated other coastal projects, including  ‘Scubasurero,’ which has HMC employees and members of the community scuba divers to pick up underwater trash.

Then there’s Coastal Cleanup, where Hinatuan beach is cleared of litter.

In due time, HMC hopes to push legislation for the protection of Hinatuan.

“We believe that if done carefully and under the guidance of scientists, artificial coral reefs have an important part to play in the global drive to restore the vibrance and productivity of the world’s seas,” Yan said. “But the best way to conserve Philippine coral reefs is still to protect what reefs we have left.”

(Tourists interested to view the artificial reefs can send a letter to HMC or coordinate with the province’s tourist service providers. While it takes almost 5 hours of travel from Butuan, Hinatuan beach’s isolated location provides a sweet escape because of the spectacular scenery above and below its seas.)