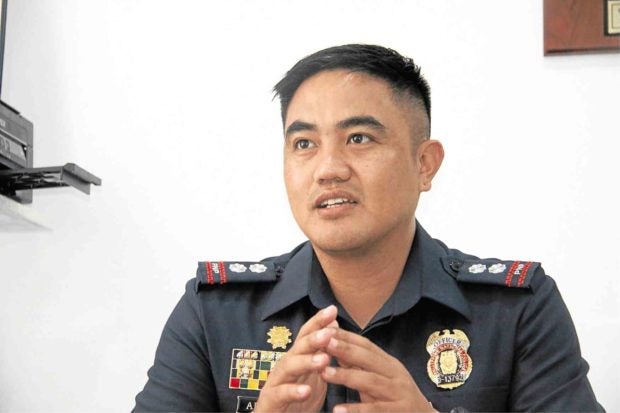 BOGO CITY, CEBU—Amid widespread claims that police have been killing suspected drug users, one police official has taken a different tack and proved that a bloodless campaign can help solve the country’s drug problem.

Meet Supt. Byron Allatog, chief of the Bogo Police Station, who chose to give drug pushers and addicts a chance to live and change their ways.

And his strategy has apparently worked, as this city 97.8 kilometers north of Cebu City, has not recorded a single killing since the 39-year-old policeman assumed his post in December 2016.

Bogo also became the first city in Central Visayas and the second in the country to be declared drug-free by the Philippine Drug Enforcement Agency (PDEA).

Allatog considers human life as sacred and believes that everyone, even the worst criminal, deserves a second chance.

His respect for life may be traced to his parents’ teachings and his roots as a member of the Bontoc tribe of Mountain Province.  Anyone who kills another human being, he said, must offer prayers and three pigs to atone for this sin in a ritual called “chaw-es.”

Having been born to a poor family of farmers, Allatog said it would have been difficult for them to raise the at least P30,000 needed to buy three pigs.

When he became a policeman in 2001, Allatog lived by what he learned as a child—the value of human life.

But the government’s brutal war on illegal drugs tested his beliefs, he admitted.  He was with the Criminal Investigation and Detection Group as assistant regional chief of Calabarzon in July 2016 when President Duterte took over the reins of government, he recalled.

“I told my men, if it is not necessary to kill, then why do it? Of course, we have to defend ourselves when the call arises. But as much as possible, I want the suspects to live,” Allatog said.

He issued the same directive when he was assigned in Bogo City in December last year.

“Human life is important. Some people may say ‘He’s a drug addict, nothing but trash.’ But do these people even consider the fact that these drug addicts have families? I want people to know that killing is not the final solution to the problem of illegal drugs,” he explained.

Since July 2016, at least 1,955 users in the city had surrendered to the police, while 45 drug pushers had been arrested in different police operations. No one was killed.

In July this year, the PDEA declared all 29 barangays in Bogo City “drug-free,” meaning they had been rid of drug pushers.

Despite the recognition, Allatog said there had been no letup in their campaign against illegal drugs, as some drug peddlers from other towns had visited Bogo City recently.

The police chief is also active in the local government’s community-based drug rehabilitation programs that have so far helped more than 200 drug surrenderers.  Included in the three-month rehab programs are seminars and physical activities.

Allatog’s community-based approach has him talking to people and encouraging them to share their problems so he can help them.  He even gives them his mobile phone number so they can text him their concerns.

“I want to empower people down to the grassroots level so they will support all our peace and order efforts. I want to get their confidence and trust. (And so far), I’ve been able to get much support,” he said.

Bogo City Vice Mayor Maria Cielo Martinez has been as supportive.  Allatog, she said, is on the right track.

“I think what he is doing is consistent with our principles and values. Definitely, that’s the direction we want to take in addressing the drug problem,” Martinez said.

Allatog’s approach has been honed by his previous assignments and training, including being part of the country’s contingent to the United Nations Peacekeeping Efforts, and training at the Federal Bureau of Investigation.

Among his awards was being named the Country’s Outstanding Police Officer in Service, given by Metrobank Foundation and the Philippine National Police in 2014.

But Allatog has a different legacy in mind: “When I’m gone, I want people to at least remember me as someone who served them well.  I am but a simple police officer who wants nothing but the best service for the people,” he said.

Read Next
Duterte foes urge people to resist ‘revolutionary gov’t’ threat
EDITORS' PICK
Diokno to Duterte: OK to make fun of buck tooth, but focus on people’s needs first
Nograles: Cabinet members to donate 75% of monthly salary to aid COVID-19 fight
Robredo spox thanks Duterte for defending VP’s efforts vs COVID-19
Quick chat with Nicole Andersson: ‘You really don’t need much to be happy’
10 Filipinos positive for COVID-19 in UK, 7 in Ireland — envoy
IATF to LGUs: Issue ordinances vs attacks on frontliners, COVID-19 patients
MOST READ
Gov’t mulling quarantine period extension of 15-20 more days
Sotto on Isko Moreno’s call: We do our job without the media following our every move
ADB warns PH against prolonged lockdown
Duterte fires PACC’s Luna for urging NBI to probe Robredo
Don't miss out on the latest news and information.