Bishop on Duterte ratings fall: Not our fault 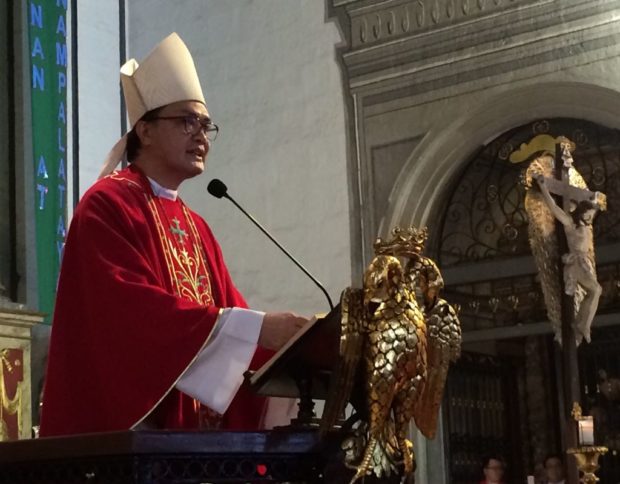 Bishop David at the mass in San Agustin – Lyn Rillon

Church officials on Thursday said blaming the Catholic Church for the fall in President Duterte’s ratings is a “convenient excuse” to divert the public’s attention from the relentless spate of killings in the past year.

“With all due respect, I’d say, sir, the fall in the ratings is not due to us Church leaders but to the extrajudicial killings themselves,” said Caloocan Bishop Pablo Virgilio David.

David, the incoming vice president of the Catholic Bishops Conference of the Philippines (CBCP), made the remarks following House Speaker Pantaleon Alvarez’s statement that bishops critical of Duterte and his bloody war against illegal drugs are to blame for the dip in the President’s ratings.

The Social Weather Station’s third quarter survey showed that Duterte’s net public satisfaction and net trust ratings fell to their lowest since he assumed the presidency in June 2016.

Alvarez lashed out at the CBCP, claiming it was a source of “noise” that could have caused the President’s ratings to slide.

Fr. Jerome Secillano, executive secretary of the CBCP’s permanent committee on public affairs, noted that blaming the Church is becoming “a convenient excuse.”

“The Church is always a convenient excuse. I’d rather that they look at their own behavior before pointing their fingers at others,” he said.

The priest said it might be the likes of Alvarez who “are the ones pulling the President down.”

“Alvarez should not make it appear that they are doing what is best for the country…They are the epitome of spoiled, entitled and arrogant politicians the public has come to abhor,” Secillano said.

David said the government’s denial of the extrajudicial killings under the Duterte administration was not helping at all.

“It does not help at all that the government keeps denying that they’re happening. It’s obvious that the public is aware of them,” the prelate said.