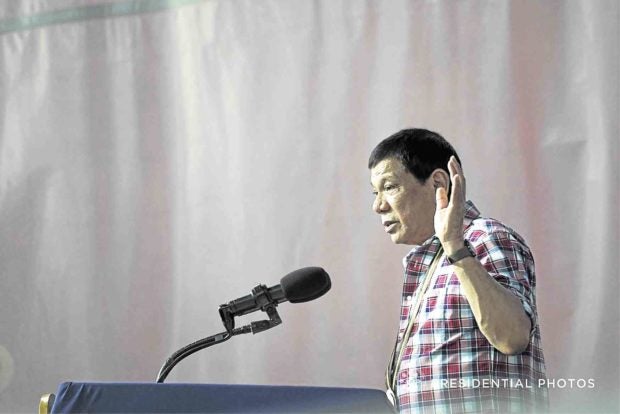 I asked you to give up the houses for Kadamay families because they are also Filipinos. This is what you get in return—Rodrigo Duterte President

SAN MIGUEL, BULACAN—President Duterte on Wednesday led the groundbreaking ceremony for a military housing project here, saying the new houses would replace the 6,000 low-cost units that were forcibly occupied by members of the urban poor group Kalipunan ng Damayang Mahihirap (Kadamay) in March.

“This is the result of that sad event (takeover). I asked you to give up the houses for Kadamay families because they are also Filipinos. This is what you get in return. These houses are far bigger than what Kadamay members have taken,” he said.

Kadamay families occupied five government housing sites mostly in Pandi town after, they said, their applications for affordable housing had been neglected by the government.

The 1,000 houses to be built on a 50-hectare land in Barangay Tartaro here are intended for members of the elite First Scout Ranger Regiment based in Camp Tecson.

The project, called Scout Ranger Ville, will be financed with a P200-million allocation from the Department of Budget and Management. The houses will have a floor size of 62 meters each. 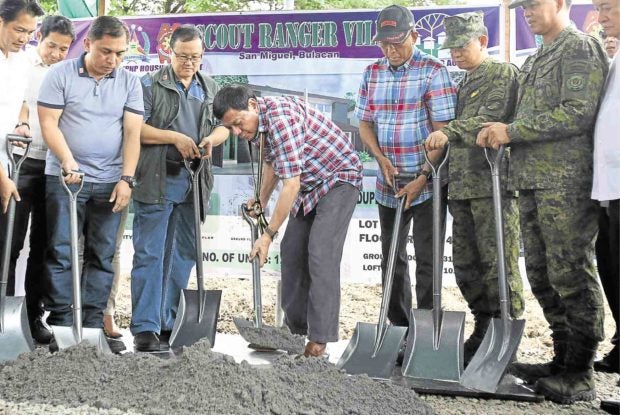 “Why did I prioritize the soldiers? The soldiers and the policemen on the average … face dangerous situations every day and the law of averages suggests you will pass on ahead of us,” Mr. Duterte said. “So I have this [affordable housing for the uniformed services] in mind.”

The houses are expected to be completed by December 2018, Mr. Duterte said, adding that each beneficiary will also receive P70,000 as assistance.

Gloria Arellano, Kadamay chair, assured there won’t be any more takeover from its members.

“That’s theirs (housing project for soldiers),” Arellano said in a text message. “But the government should still focus on developing housing for the poor.” —CARMELA REYES-ESTROPE