Evacuees can’t go home yet even if Marawi conflict ends 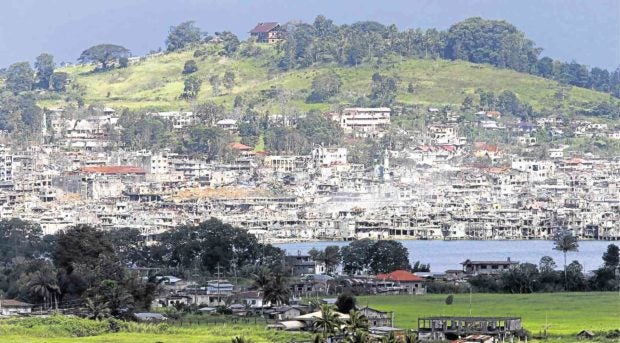 SCAR OF WAR The government is preparing a rehabilitation plan for Marawi City after intense fighting between the military and Islamic State-inspired terrorists in the last four months left sections of the picturesque lakeside capital of Lanao del Norte province devastated. —JEOFFREY MAITEM

MARAWI CITY—Even if the war here ends in the next few days as the military had earlier projected, it would still take time for the more than 50,000 families displaced by the almost five-month fighting to even visit their villages, a military commander said.

Col. Romeo Brawner Jr., deputy commander of the Joint Task Group Ranao, said the end of the fighting would not automatically mean immediate homecoming for Marawi residents as the military still had to conduct clearing operations for unexploded ordnance or booby traps while other government agencies had to look for and retrieve bodies and skeletal remains in the city.

This developed as the Task Force Bangon Marawi, which is tasked to lead the city’s rehabilitation, had considered at least three options to rebuild Marawi. Among these was building an entirely new city in another site, away from the district already devastated by war that started on May 23 when Islamic State-inspired terrorists laid siege to the Lanao del Sur provincial capital.

Lt. Gen. Carlito Galvez, commander of the Western Mindanao Command, said other options were to rebuild houses, buildings and establishments, and to relocate residents whose properties were destroyed or damaged in the war.

President Duterte had pledged P20 billion for the rehabilitation of Marawi but Sen. Sherwin Gatchalian, who recently visited the war-torn city, believed the government would need about P47 billion to rebuild the city.

Lanao del Sur Vice Gov. Mamintal Adiong said local officials had yet to decide on how to proceed with rebuilding.

Crucial to the recommendations that the provincial government will be drafting is the fact that about 6,000 hectares of the 8,755-ha city is part of a military reservation, according to Adiong.

“We want to know what specific areas are within the military reservation,” he said.

He said those living inside the military reservation could either stay or be relocated, depending on the result of discussions between the military and the national government.

Adiong said they would also push for compensation of residents who lost their homes in the war, a move that Marawi City Mayor Majul Gandamra had earlier raised.

“One of our advocacies is the rehabilitation and rebuilding of not just public infrastructure but also private properties … Based on our talk with [members of] Task Force Bangon Marawi, they are open to the idea of compensating the victims,” Gandamra told the Inquirer.

Adiong said it would take time before residents could go back to their villages because they needed to ensure that the city had been cleared of improvised explosive devices (IEDs) and due to health concerns. He said government teams would conduct sanitation procedures, especially in areas where bodies had been found.

Galvez said it might take them about a month to clear the city of IEDs and other things that would pose harm to the safety of returning residents.

He said the military had planned to allow the temporary return of residents by clusters.

“We will make sure that all [members of] the Maute [group] and other threats are completely eliminated first,” Galvez said.

Brawner said even areas that military had secured and taken control during the early days of the fighting turned out to be not safe when explosives were discovered during last week’s cleanup drive.

The government, however, has been readying an 11-ha relocation site in Barangay Sagonsongan here where temporary shelters are being built.

According to Mohammad Mustafa, the city’s chief building permit officer, the earliest time some displaced residents can move to Sagonsongan will be in January next year.

The Chinese Filipino Business Club recently donated modular houses, which soldiers helped put up, for some families at the evacuation center in Bito Buadi Itowa.