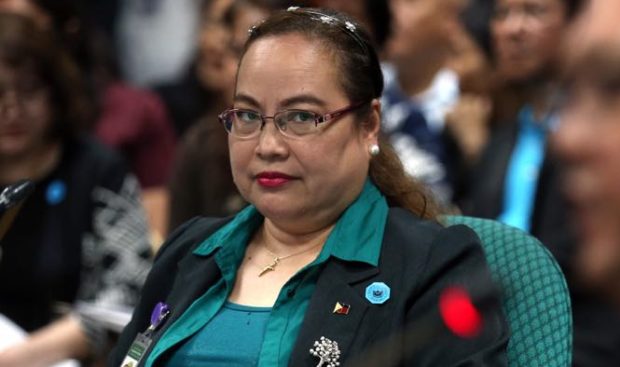 The Commission on Appointments has rejected the appointment of Paulyn Jean B. Rosell-Ubial as Health secretary. INQUIRER FILE / LYN RILLON

THE powerful Commission on Appointments (CA) rejected on Tuesday the ad interim appointment of Health Secretary Paulyn Ubial, the fifth Cabinet member to be booted out in the 17-month-old Duterte administration.

Ubial was not present at the plenary which was held an hour after the CA committee on health chaired by Sen. Gregorio Honasan II terminated its confirmation hearing on the health secretary.

Honasan said the committee decided to “withhold its consent” to the ad interim appointment of Ubial.

The plenary then approved the recommendation of the committee.

Honasan later told reporters they stopped counting the votes when 13 members signified their opposition to her confirmation.

After the hearings were terminated, Ubial was teary-eyed as she hugged and kissed her supporters.

Ubial told reporters she was fond of “teleseryes” as she wiped away tears.

Earlier, she said she would accept any decision by the CA.

Aside from Ubial, the other Cabinet members whose appointments were rejected by the CA were Perfecto Yasay (as foreign secretary), Regina Lopez (environment), Judy Taguiwalo (social welfare) and Rafael Mariano (agrarian reform). /cbb