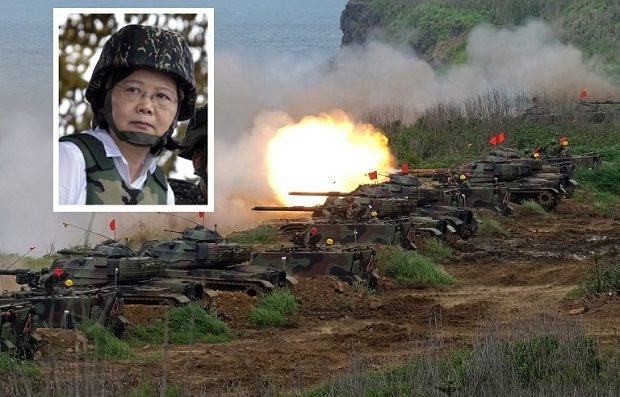 US-made M60 A3 tanks open fire during the ‘Han Kuang’ (Han Glory) live-fire drill on the outlying Penghu islands, west of Taiwan on May 25, 2017. President Tsai Ing-wen (inset) said on Monay, Oct. 9, 2017, that Taiwan would be strengthening its military while seeking peace with rival China. AFP

TAIPEI, Taiwan — Taiwan president Tsai Ing-wen pledged on Monday to bolster the island’s military but added it will not “seek war” amid tensions with its biggest rival China.

Cross-strait relations have rapidly deteriorated since Tsai took office last May, with Beijing cutting all official communications with Taipei as it does not trust her traditionally pro-independence Democratic Progressive Party.

The two sides split after a civil war in 1949 but China still sees self-governing Taiwan as a wayward province to be brought back into its fold, by force if necessary.

Tsai made the remarks Monday in a national address at a National Day celebration, her second since taking office last year.

Taiwan is committed to build its own military jets and submarines, and should be prepared for increasing cybersecurity and espionage risks, she said.

“Although we are strengthening our military capabilities, we do not seek war,” she said.

“We remain committed to maintaining peace and stability both in the Taiwan Strait and across the region.”

China has repeatedly said Tsai must acknowledge both sides are part of “one China” for dialogue to resume, but the Taiwan leader has refused to do so.

Beijing has ramped up pressure on Tsai by sailing its sole aircraft carrier and flying jets near the island during military exercises, as well as blocking Taipei from participating in key international events.

“Although political differences between the two sides have led to some complications, we have nevertheless worked to maintain the basic stability of cross-strait relations,” Tsai said Monday, adding Taipei will not “bow to pressure.”

Tsai’s remarks come as China’s Communist Party is set to hold its 19th congress next week — expected to cement President Xi Jinping as the most powerful Chinese leader in a generation.

Beijing sees any calls for Taiwan independence as a challenge to its power, even though the island today is a thriving democracy.  /cbb