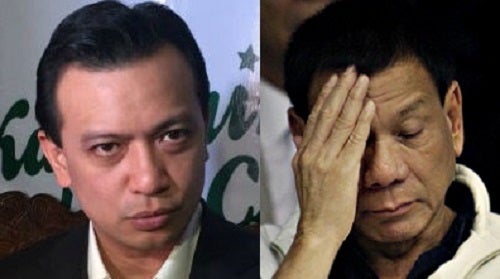 Senator Antonio Trillanes (left) said Monday, Oct. 9, 2017, that he was encouraged by the drop in the satisfaction and trust ratings of President Rodrigo Duterte (right). INQUIRER FILES

Filipinos are beginning to see the light, according to Senator Antonio Trillanes IV after the satisfaction rating of President Duterte dropped in the latest Social Weather Stations (SWS) survey.

“It’s very encouraging to know that the Filipino people are beginning to see the light,” Trillanes said in a statement.

“They are now seeing Duterte for who he really is: a lying, rude, amoral, corrupt and oppressive former mayor who is totally incompetent about governance at the national level,” he said.

President Rodrigo Duterte’s net satisfaction rating fell to “good” based on an SWS survey conducted from Sept. 23 to 27.

According to the third quarter survey, 67 percent of adult Filipinos, or about 7 out of 10, were satisfied with Duterte’s performance, while 14 percent were undecided, and 19 percent were dissatisfied.

Compared to the June 23 to 26 survey, the number of dissatisfied rose from 12 percent, a seven-point increase. The number of undecided also went up four points from only 10 percent in June.

Compared to June’s +66 or very good rating, the recent survey showed a net satisfaction rating of +48, classified by SWS as good.

Trillanes, one of Duterte’s vocal critics, said the President’s bloody war on drugs, which he said killed thousands of Filipinos “created a climate of fear across the country.”

Duterte’s performance in the following surveys are expected to be worse, said Trillanes.

“To think that this survey was done just before the Ombudsman confirmed Duterte’s billion peso bank deposits, so the next survey results are expected to be worse,” he said.

The claim of the Ombudsman cited by Trillanes was belied by the Anti-Money Laundering Council, which declared that it never gave the anti-graft body any details of Duterte’s bank accounts.

Trillanes has accused Duterte of having billions in his bank accounts even before the 2016 elections. Despite this, Duterte won a landslide election victory and maintained “very good” satisfaction and trust rating until June 2017.

For Senator Win Gatchalian, the dip in Duterte’s ratings was just “part of the cycle of politics.”

Gatchalian, who is part of the  majority bloc in the Senate, said it should not be a cause of concern for the Duterte administration.

“Historical data shows that presidents usually experience a dip in trust and approval ratings after their first year in office,” Gatchalian said in a separate statement.

“It’s just a part of the cycle of politics, and it shouldn’t be a cause for concern in Malacañang. What is clear in the survey results is that the Filipino people continue to trust the President and approve of his performance, despite the ratings dip,” he said.

But the senator advised that the executive branch should not become complacent.

“I encourage the President and his administration to view these survey results as a constructive challenge to do more for the Filipino people. Corruption, poverty, and police impunity are three important issues in particular which deserve more attention from the executive branch,” he said. /cbb