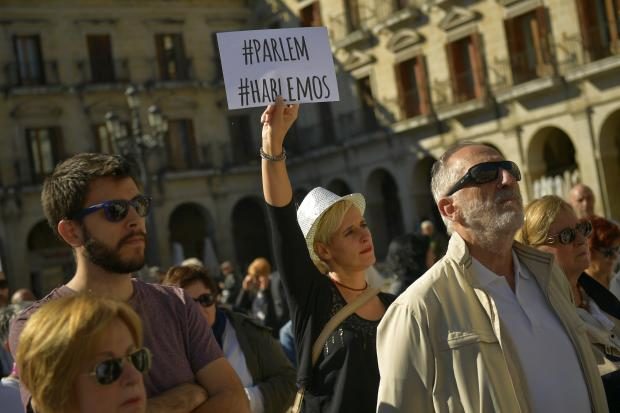 A woman holds up sign reading in Spanish and Catalan language, “Let’s Talk,” as she takes part in a rally calling to find a solution for the crisis with Catalonia’s secession at Plaza España square, in the Basque city of Vitoria, northern Spain, Saturday, Oct. 7, 2017. Catalonia’s government planned a referendum for secession last Oct, 1, but Spain’s government called the vote illegal, since it violates the constitution, and the country’s Constitutional Court ordered it suspended. (Photo by ALVARO BARRIENTOS / AP)

BARCELONA, Spain — Thousands rallied in Madrid and Barcelona on Saturday in a last-ditch call for Spanish and Catalan leaders to stave off a national crisis amid Catalonia’s threat to secede.

The rallies in the Spanish capital and the Catalan city were held with the slogan “Shall We Talk?” in an effort to push lawmakers in both cities to end months of silence and start negotiating. Attendees respected the organizers’ call to not bring the Spanish or Catalan flag.

Catalonia’s regional president Carles Puigdemont has vowed to make good on the results of last Sunday’s disputed referendum on secession won by the Yes side. Spanish Prime Minister Mariano Rajoy warned that the vote was illegal and has promised that Catalonia is going nowhere.

“We have to find a new way forward,” said Miquel Iceta, the leader of Spain’s Socialist party in Catalonia. “It’s the moment to listen to the people who are asking for the problem to be solved through an agreement, and without precipitated and unilateral decisions.”

In a separate rally in Madrid’s Colon Square, thousands clamored for the unity of Spain and against any attempt by the northeastern region to break away. The crowd bristled with Spanish flags. Pro-union forces will try to generate momentum on Sunday in a protest in Barcelona.

The calls for dialogue and unity come after a traumatic week, with riot police storming several polling stations in an unsuccessful attempt to impede the referendum. Instead, hundreds of voters were left in need of medical attention.

Even though 2.2 million Catalan voted – with 90 percent backing independence – the referendum polled less than half of the region’s electorate. Puigdemont declared he would seek a declaration of independence in the regional parliament anyway.

The bloodied vote was followed by a strike on Tuesday across Catalonia to protest the police violence. Then came the stern message from Spain’s King Felipe VI that the Catalan government and parliament were breaking the law.

Puigdemont and his separatist supporters were struck a blow when Catalonia’s top two banks, CaixaBank and Banco Sabadell, as well as energy giant Gas Natural announced they were relocating their headquarters from Catalonia to other parts of Spain.

Other companies are considering such a move to ensure that the region’s possible secession wouldn’t knock them out of the European Union and its lucrative common market.

Spain’s Minister of Public Works Iñigo de la Serna said on Saturday that “the companies will keep leaving and it’s exclusively the fault of the members of the regional government.”

The warnings by the business sector have coincided with the first calls from within Puigdemont’s government to hold off on a declaration of independence.

“We have to give it one more chance, maybe the last chance, and perhaps the only way that can happen is to start with a cease-fire,” Vila said.

Vila said he would like to see Spanish authorities return powers to the region which they have assumed in recent weeks, including control of a large part of its finances.

It is unclear how widespread Vila’s moderate position is inside the Catalan government, which is being pressured by separatist grassroots groups and the far-left party CUP to declare independence soon.

Separatist lawmakers had planned to discuss a secession plan on Monday, but that session in the regional parliament was suspended by the Constitutional Court.

The focus has shifted to Tuesday, when Puigdemont is set to address the regional parliament “to report on the current political situation.”

The most recent polls taken before the referendum showed that the region’s 7.5 million residents were roughly split on the issue.