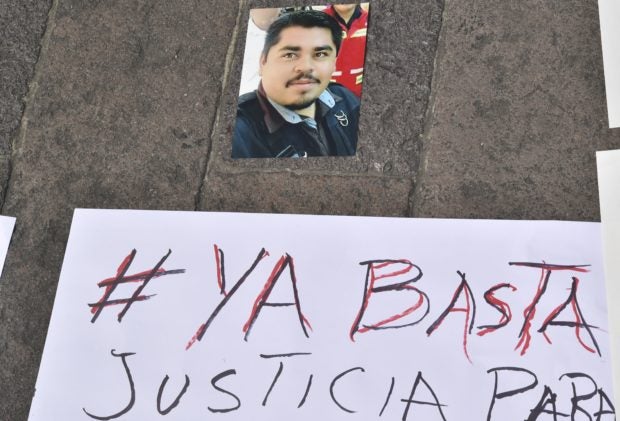 View of a picture of slain Mexican photojournalist Edgar Daniel Castro displayed in front of the government’s palace during a demonstration to demand justice for his murder, in San Luis Potosi, Mexico on October 6, 2017.
Castro was kidnapped from his house by gunmen and was found dead on Friday in San Luis Potosi. AFP PHOTO / YURI CORTEZ

MEXICO CITY — A photojournalist who received threats over his work has been found dead in northern Mexico a day after he was kidnapped, officials said Friday, making him the 11th journalist killed in the country this year.

The government’s Mechanism to Protect Journalists and Rights Activists called for an “immediate and effective investigation” into the killing of Edgar Daniel Esqueda Castro, 23, who was reportedly kidnapped Thursday by gunmen posing as police officers in the city of San Luis Potosi.

There were immediate protests in Mexico, which drug wars and corruption have made one of the most dangerous countries in the world for the press, according to rights groups.

Esqueda’s body was found dumped near the San Luis Potosi airport, bound and bearing signs of torture, according to local media reports and the rights group Reporters Without Borders.

His wife told the press freedom watchdog that gunmen claiming to be police had burst into their home while they slept early Thursday, thrown Esqueda to the floor and then hauled him away at gunpoint.

Prosecutors said Thursday that no actual police were suspected in the crime.

The federal protection program said Esqueda, who worked for the daily newspaper Metropoli San Luis and the news website Vox Populi, had recently told authorities that state police had threatened and harassed him while he was working.

He said five police officers had threatened to beat him up and take his camera while he photographed the scene of a shootout on July 4, forcing him to delete his photos.

Nine days later, police reportedly harassed him again, saying they “would be watching him” because they suspected he was “passing information to the bad guys,” the federal protection program said in a statement.

But it is unclear whether he was ever given any of the measures offered by the program, such as security cameras, panic buttons or bodyguards. The interior ministry did not immediately respond to a request for information.

The protection program, launched in 2012, has been widely criticized for failing to stop the murders of journalists and activists.

Colleagues of the slain photojournalist protested in San Luis Potosi after his body was found, placing their cameras on the ground atop handwritten signs reading “Enough already” and “Justice.”

The Latin America director for Reporters Without Borders, Emmanuel Colombie, condemned the “hateful crime,” calling on authorities to punish Esqueda’s killers and protect his family.

Rights groups say at least 11 journalists have been killed in Mexico so far in 2017. That would put this year on a par with last as the deadliest ever for journalists in Mexico.

It is unclear whether they were all targeted because of their work, but most of them had been reporting on drug cartels or political corruption.