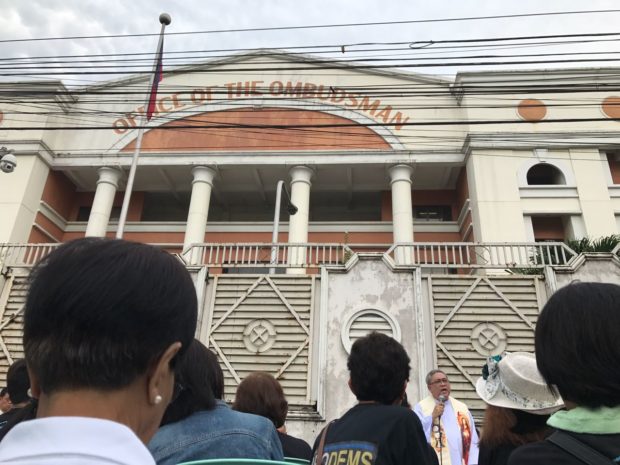 Ombudsman supporters hold a solidarity Mass outside of the agency’s office. RYAN LEAGOGO/INQUIRER.net

Supporters of Ombudsman Conchita Carpio Morales gathered to attend a Mass outside the antigraft agency Friday morning to express their solidarity with her and the agency as it investigates President Rodrigo Duterte’s alleged undeclared wealth.

(It’s her duty to investigate. We support and we believe that she should be able to carry out her duty.)

Soliman urged Duterte to sign the waiver of his bank accounts to dispel the corruption allegations against him and his family.

(We should recognize who was mandated by the Constitution to investigate regardless of which government. It’s simple, once the waiver is signed, we will know the truth.)

Morales, whose impeachment is also being pushed by the President, did not attend the Mass, but dropped by to greet the attendees a few minutes before it started.

(The Constitution cannot be abolished. The Office of the Ombudsman is the sole watchdog that corrects and balances and it must not be intimidated.)

Other personalities who were spotted at the event were former Human Rights Commissioner Etta Rosales and Magdalo Representative Gary Alejano.

Groups present at the Mass included Tindig Pilipinas, Prayer Battalion for Truth and Justice, Magdalo and Silent No More.

The attendees occupied almost the entire parking lot outside the office.

The Ombudsman, in a statement read by Director Rhodora Galicia after the Mass, said it is grateful for the expression of solidarity.

“The Office of the Ombudsman is grateful for your expression of solidarity in support of the institution and its steadfast commitment to uphold the rule of law and perform its constitutional mandate. We join you in praying for our country,” she said. /idl