Tax raps vs Mighty dismissed after BIR agreed to a settlement 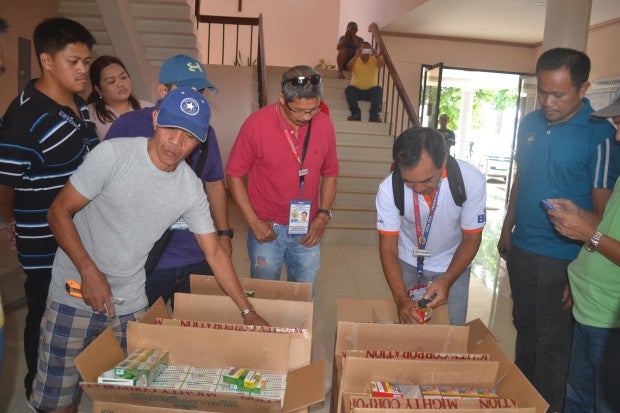 Personnel from the Bureau of Internal Revenue and the Bureau of Customs open up boxes of seized Mighty cigarettes with fake tax stamps inside the BOC-Region 8 office in Tacloban City. (FILE PHOTO BY JOEY GABIETA / INQUIRER VISAYAS)

(Updated 6:01 p.m., Oct. 6) The Department of Justice (DOJ) has dismissed the three tax evasion complaints worth a total of P37.9 billion against tobacco company, Mighty Corp., after the Bureau of Internal Revenue (BIR) decided to withdraw its charges.

In a joint resolution dated Oct. 2 and made public Friday, the DOJ approved the BIR’s motion to withdraw filed on Sept. 26. The department’s decision came almost three months after President Rodrigo Duterte ordered the BIR and the Department of Finance to accept Mighty’s P25-billion tax settlement offer.

In an interview with reporters, Justice Secretary Vitaliano Aguirre II said the government was P40-billion richer as the company settled its liabilities a few weeks ago.

“We consider this case as closed and the government of the Philippines richer by P40 billion, including taxes,” Aguirre said.

“Actually I think (the principal amount is) P30 (billion) but there is going to be taxes amounting to about P10 billion more,” he added.

READ: DOF to heed Duterte order to settle with Mighty

The BIR, in its plea, cited Section 204 of the National Internal Revenue Code (NIRC), which allows the Commissioner the power to “compromise, abate and refund, or credit taxes.”

“Complainant BIR referred to the approved settlement of Mighty Corporation’s excise tax as well as compromise settlement of all its pending tax-related issues including that of its officers and shareholders,” the joint resolution stated.

“In view of the fact that the NIRC recognizes the authority of the Commissioner of the Bureau of Internal Revenue to compromise, abate and refund or credit taxes, and to compromise criminal violations except those already filed in court or those involving fraud, and considering further, that the parties to the instant are not opposed to the prayer for the withdrawal of the complaints, it behooves this Office to grant the motion if only to promote greater interest of the parties involved,” it added.

The BIR had filed three tax evasion complaints against Mighty and its top executives for a total of P37.9 billion in unpaid excise taxes for allegedly using fake tax stamps.

The tax settlement, Duterte said in his second State of the Nation Address, would be used to rehabilitate the war-torn Marawi City and Ormoc City, which was recently damaged by a 5.1-magnitude quake. /jpv