PNP to use new rifles, ammo donated by China—DND chief 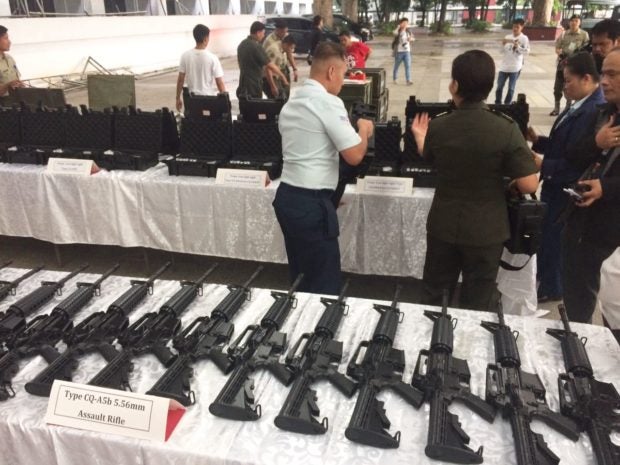 The Department of National Defense shows the firearms and other military equipment donated by the Ministry of National Defense of the People’s Republic of China to the Armed Forces of the Philippines during a turn-over ceremony held at Camp Aguinaldo, Quezon City. NIÑO JESUS ORBETA / Philippine Daily Inquirer

The new set of rifles and ammunition donated by the government of China to the Philippines will be used by the Philippine National Police (PNP), Defense Secretary Delfin Lorenzana said Thursday.

“According to the directive of the President they will be given to the PNP. If you remember the PNP tried to buy firearms from the US but it has taken them too long to deliver. We are lucky the Chinese government stepped in,” he told reporters at the handover ceremony at Camp Aguinaldo.

Chinese Ambassador Zhao Jinjuan led the turnover of 3,000 M4 rifles, three million rounds of ammunition, and 30 sniper scopes to Lorenzana and the Armed Forces of the Philippines.

The sniper scopes, meanwhile, will be used by the military.

The first batch of the weapons, amounting to around $7 million donated by China last June, were also given to the PNP. It aimed to highlight the renewed ties of the two countries under the Duterte administration.

They have also donated P15 million pesos in relief assistance to the victims of the Marawi siege. /jpv