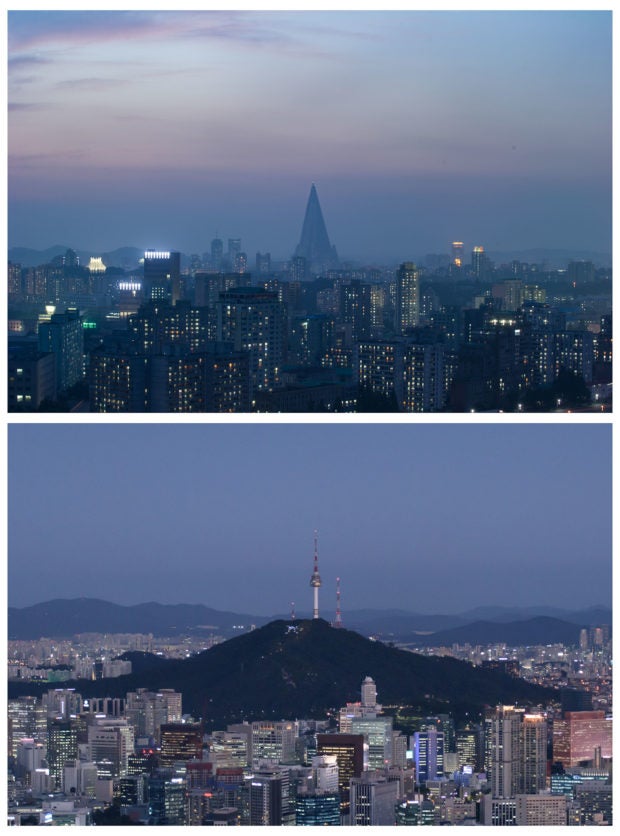 This combo of photos put together on October 3, 2017 shows the skyline of Pyongyang (top) on May 5, 2013 and the skyline of Seoul on July 9, 2015. North Korea suffers from perennial energy shortages, epitomized by satellite photos of the country at night, showing it as a largely dark quadrilateral between the bright lights of China and the South. AFP

At the turbine hall at North Korea’s Wonsan Number 5 hydropower station, a placard mounted on a wall proclaims: “Prosperous and Powerful Nation”. But when it comes to electricity the North is anything but.

The country has made rapid progress in its weapons programme under leader Kim Jong-Un, detonating what it said was an H-bomb last month and launching intercontinental missiles that apparently bring much of the US mainland into range.

However, nearly 70 years after it was founded, the North suffers from perennial energy shortages, epitomized by satellite photos of the country at night, showing it as a largely dark quadrilateral between the bright lights of China and the South.

Pyongyang is unusually dim for a capital city, the pale glow emerging from apartments often outshone by the moon.

Solar panels are ubiquitous across the city’s balconies and students gather under streetlights at night to read their books.

At the Wonsan power station, the turbine hall is dominated by a giant mosaic portraying the mythical birthplace of Kim Jong-Il, Kim’s father and predecessor as North Korean leader, a hut on the sacred Mount Paektu.

Several meters below, thousands of litres of water thunder through the generators every hour, spinning the turbines to produce electricity for a region on the east coast, chief engineer Choe Yong-Jun says, adding that while the complex’s total capacity is 60,000 kW/h, actual production is a fraction of that.

“We have normalized our production rate at 25,000 kilowatts per hour,” he told AFP — little more than 40 percent.

Citizens in the dark

It was not always thus. Under Japanese colonial rule northern Korea was developed as the industrial hub, with the southern part regarded as a agrarian backwater, and when the North designed its national emblem in the 1940s it gave pride of place to the Suphung hydroelectric dam on the Yalu river.

“Back then, they had the best generation capacities in east Asia, probably better than in Japan, definitely better than anywhere else,” said Andrei Lankov of Korea Risk Group.

But after the Soviet Union collapsed in the early 1990s, the North lost its access to heavily subsidized spare parts and technical expertise, and electricity generation nosedived.

It has crept up more recently, but Lankov added: “It seems that their power generation is roughly half of what it used to be in the early 1990s. It has gone down significantly.”

According to the latest available figures from the International Energy Agency, hydroelectricity accounted for 73 percent of the North’s power production in 2015, with coal in second place.

Average consumption per capita was 0.46 megawatt hours, it says — less than a twentieth of that in the neighboring South.

Authorities ration power according to priority, with staff at important factories or prestige projects such as the Taedonggang brewery and the capital’s Kaeson Youth Park funfair — whose bright lights contrast with the gloomy blocks nearby — telling AFP they never experience power cuts.

The Chollima Steel Complex, one of the North’s biggest manufacturers of the metal, has a guaranteed supply, according to deputy chief engineer Kim Gil-Nam.

“Our steel complex is very important to the state so any power outage here will be viewed as a huge incident on a national level,” he told AFP. “We are provided with electricity under the state plan so our production has had no restrictions.”

That often leaves ordinary citizens in the dark.

They have taken matters into their own hands, with the widespread domestic installation of Chinese-made solar panels. They are among the most popular items traded across the two countries’ shared border, and supermarkets in Pyongyang sell a 35-watt model for the equivalent of about $45 — an affordable purchase for many of the capital’s privileged residents.

At the same time energy-efficient, low-cost LED technology has brightened the nights of many North Koreans, and analysts say that in time it could make the dark satellite images a thing of the past.

But it could be a false dawn because basic solar panels can only power lighting and devices that consume less electricity such as televisions.

“North Korea is probably the most solar-powered country on earth,” said Lankov.

But, he added, “it’s not incidental that once you cross the border from North Korea into China you see very few solar panels.

“Because if you have reliable grid supply it doesn’t make sense.”