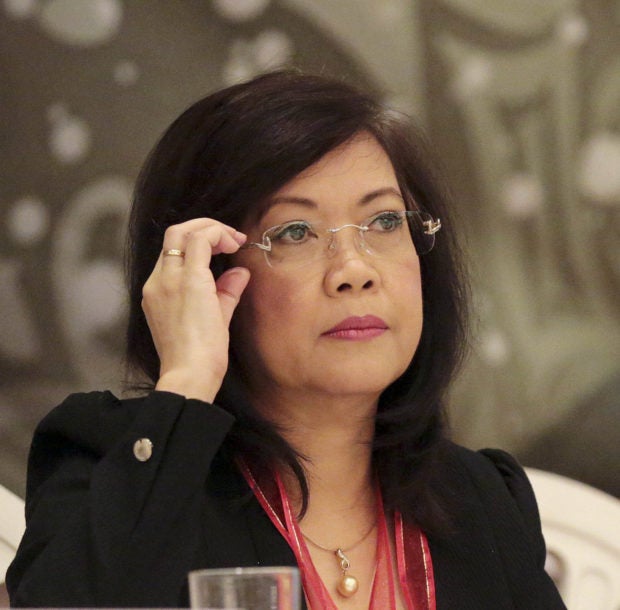 Chief Justice Maria Lourdes Sereno won’t be appearing personally at the hearing of her impeachment case at the House of Representatives, but she insists that her lawyers be allowed to cross-examine witnesses on her behalf.

Sereno’s lawyers submitted another letter on Wednesday to the House justice committee asserting her right to be represented by counsel and, through them, to confront and cross-examine the witnesses who would testify against her.

“She elects, yes, that it is her lawyers that will be doing the cross-examination,” said lawyer Josa Deinla.

The House panel chaired by Oriental Mindoro Rep. Reynaldo Umali is set to hear the impeachment complaint filed by lawyer Lorenzo Gadon against Sereno on Thursday to determine sufficiency of grounds.

If the committee finds the grounds in the impeachment complaint sufficient enough, it will proceed to another hearing to determine probable cause.

But Sereno would not personally appear at the hearing “for the reason that she does not want to be distracted from her duties as the Chief Justice,” Deinla told reporters.

“Please remember that as the chief magistrate of the Supreme Court, she’s wearing so many hats. She has six other functions and other offices where she serves important responsibilities. These tasks exact or demand her full attention,” she added.

In their six-page letter, the Chief Justice’s lawyers invoked a number of laws and rules on the right of any respondent to be represented by counsel in cross-examining the witnesses against her.

“The right to be heard and be defended by counsel in all stages of a criminal proceeding is a very basic right of an individual, which not even this Honorable Committee, indeed Congress, can take away from a Respondent in an impeachment proceeding,” the letter read in part.

It cited Section 12, Article III of the 1987 Constitution providing that: “No person shall be held to answer for a criminal offense without due process of law.”

“In all criminal prosecutions, the accused shall be presumed innocent until the contrary is proved, and shall enjoy the right to be heard by himself and counsel, to be informed of the nature and cause of the accusation against him, to have a speedy, impartial, and public trial, to meet the witnesses face to face, and to have compulsory process to secure the attendance of witnesses and the production of evidence in his behalf,” the section states.

“The right to counsel is accorded to every person not only at the time of his presentation in a trial, but even as early as his investigation for any offense,” the lawyers insisted.

Sereno’s lawyers said they disagreed with Umali when he told reporters that only Sereno would be allowed to personally confront the witnesses—not her counsel.

“The impeachment rules of the 17th Congress do not prohibit the CJ’s lawyers from speaking or conducting cross-examination. Why not? Because to do so would violate the Constitutional right to counsel and to be heard through counsel,” they said in a statement.

“Since impeachment proceedings are akin to criminal proceedings, the CJ is also entitled to these rights which are guaranteed by no less than our Constitution,” they said.

“These rights would be rendered useless and would have no meaning, if, as Chairman says, the CJ’s lawyers are not allowed to conduct cross-examination, much less speak, during the hearings that may be conducted by the Committee on Justice,” the lawyers said.

In their letter to the House panel, Sereno’s lawyers said there was no provision in the House rules on Impeachment, or even in the House of Representatives’ own rules which expressly prohibited counsel for the respondent in an impeachment proceeding from conducting cross-examination.

“Indeed, it makes little sense to recognize the right to cross-examine, and limit the exercise of such right to the person of the Respondent alone,” they said.

“The prerogative to decide how to exercise the right to cross-examine, whether in person or through counsel of his or her choice, should be left to the Respondent, as law and common sense dictate,” the lawyers said.

Asked to comment, Gadon said: “I will abide by the House rules and whatever interpretation the chair of the committee would rule on the matter.”

“I find no repulsive reason why the CJ Justice would refuse to be the one to conduct the cross examination herself, anyway she is lawyer herself and a Chief Justice at that and I am just a private lawyer,” he told reporters.

“I can conduct the direct and cross examination even without representation of another lawyer. I do this as a profession so i don’t mind doing it in any situation,” he added. /jpv