Carandang: Ombudsman has observed confidentiality in probe on Duterte 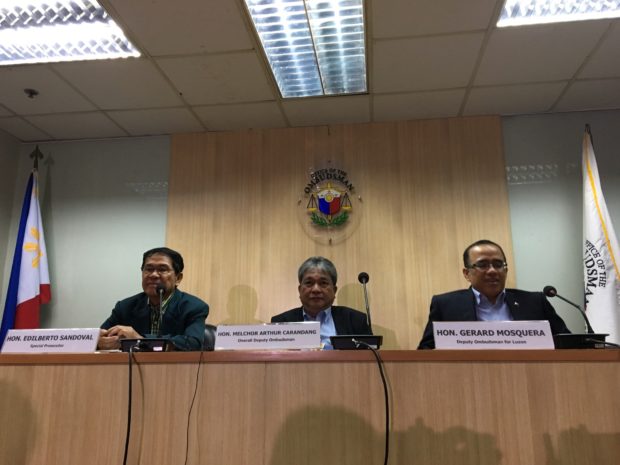 Overall Deputy Ombudsman Melchor Arthur Carandang maintained on Monday that the Office of the Ombudsman has observed confidentiality in its investigation into President Rodrigo Duterte’s wealth.

“Overall Deputy Ombudsman Melchor Arthur Carandang maintains that the Office of the Ombudsman has observed confidentiality in the Ombudsman investigation on the complaint against then Mayor Rodrigo Duterte, which complaint was filed, in fact, even before the 2016 elections,” Carandang said in a statement.

Carandang reiterated that “he was reading through the documents shown to him by the media during an ambush interview in response to media’s inquiry on the status of the complaint after more than a year since its filing and in stating that a request was made to AMLC as part of the regular investigative process.”

Carandang is leading the Office of the Ombudsman’s probe on Senator Antonio Trillanes IV’s complaint against Duterte. The senator claimed the President amassed over a billion pesos worth of unexplained wealth.

Ombudsman Conchita Carpio Morales authorized Carandang after she inhibited herself from handling the case, because her nephew, Atty. Manases Carpio, is married to the President’s daughter and Davao City Mayor Sara Duterte-Carpio.

Meanwhile, Deputy Minority Leader and Kabayan Party-list Representative Harry Roque warned Carandang against issuing inflammatory statements that may pit the Office of the President and the Office of the Ombudsman against each other.

“Deputy Ombudsman Carandang should refrain from issuing precipitous and preemptive statements that only tend to bring the Office of the Ombudsman and the Office the President on a collision course,” Roque said in a statement on Monday.

“Given that constitutional and political institutions are now under heightened scrutiny, no good can come out of pitting the Ombudsman against the President. Finish the investigation and let the result speak for itself,” he added.

Roque noted that the proposed commission to investigate the Office of the Ombudsman is actually allowed under the residual powers of the President under Marcos v. Manglapus (G.R. No. 8821, October 27, 1989).

“The proposed commission, though, will be of limited utility since it is only fact-finding as the Ombudsman Conchita Carpio-Morales herself is subject to impeachment and all others are subject to supervision and control of the Ombudsman only,” he said.

“Deputy Ombudsman Carandang cannot deny that there is corruption in the Office of the Ombudsman, especially on the issue of ‘parking fees.’ What the proposed commission can do is to recommend to the Ombudsman the filing of charges against versus corrupt personnel of the Ombudsman,” he added.

Roque alleged that so-called “parking fees” were being paid to Ombudsman personnel to intentionally slow down the investigation of cases, prompting the anti-graft court to dismiss the cases.

“Those cases that have already been paid these parking fees are designed to fail given the inordinate delay in the investigation and the filing of complaints,” he said.

He also said that he has personally experienced filing cases in the Office of the Ombudsman in the past and these cases have “barely even made it past the fact-finding stage even though five, six years have already come and gone.”

However, the lawmaker stressed the Ombudsman has its own mechanisms of investigating erring personnel.

“It is a tall order for the Ombudsman to prove that the proposed Commission is in fact redundant,” Roque added. /je