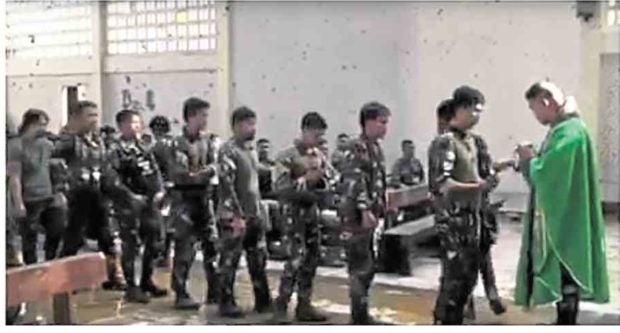 An Army chaplain is shown in this video grab blessing soldiers who heard Mass at the first religious service in St. Mary’s Cathedral since war started in Marawi City on May 23. —PHOTO COURTESY OF JOINT TASK FORCE RANAO

MARAWI CITY — In a gathering that was both rich in symbolism and reminders of war’s evils, at least 300 soldiers attended Mass at a church that represented religious tolerance in this predominantly Muslim city and which Islamic State (IS) followers desecrated to show their disdain for Christianity.

With sunlight piercing the bullet holes on its galvanized iron roof, the St. Mary’s Cathedral came to life anew for the first time since war broke out on May 23 between government forces and homegrown IS groups—Maute and Abu Sayyaf—that tried to establish an IS province.

The Mass, celebrated by a military chaplain, went on as gunfire and explosions outside the cathedral provided a booming background noise to prayers and hymns.

Col. Romeo Brawner, deputy commander of the antiterrorism Joint Task Force Ranao, said the Mass was celebrated while government forces continued their assault on IS positions.

The Mass, which started at 7 a.m., was held in the same cathedral where the city’s highest Catholic official, Vicar General Fr. Teresito Soganub, and 10 others were kept as captives by IS. The cathedral had been recently liberated by the Army from terrorists.

Brawner said the celebration of Mass on Sunday also coincided with the feast of St. Therese, patron saint of soldiers. It also came on the fourth anniversary of the military’s liberation of Zamboanga City from followers of Moro leader Nur Misuari.

St. Mary’s Cathedral, which had become a symbol of peaceful coexistence between Muslims and Catholics in the city, had been retaken by government soldiers on Aug. 25 after it became among the first structures ravaged by the terrorists.

Scenes of pillage unfolded as soldiers entered the cathedral to hear Mass. Catholic icons were scattered everywhere alongside bullet shells. Once shiny floor tiles had been broken to pieces. IS had tried to raze the church.

The cathedral was freed from occupation by IS a day after soldiers drove the terrorists away from the Islamic Center and Grand Mosque, two key Islamic facilities.

Capt. Jo-ann Petinglay, then speaking for Joint Task Force Marawi, said that like the cathedral, the mosque had also been desecrated by Maute gunmen.

But the cathedral took the brunt of the attacks. Services at St. Mary’s had to be put on hold until soldiers finished rebuilding some facilities and removing unexploded bombs and booby traps. —Reports from Jeoffrey Maitem and Allan Nawal