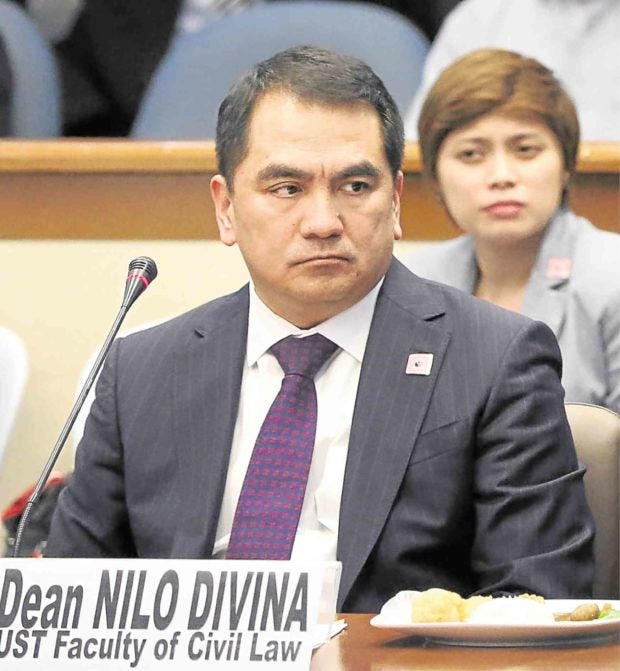 The dean of the University of Santo Tomas (UST) Faculty of Civil Law, Nilo Divina, should also be investigated in connection with the hazing death of Horacio Tomas “Atio” Castillo III, according to the lawyer of the victim’s family.

“I am hoping the National Bureau of Investigation will include Dean (Divina) as one of the persons of interest,” Lorna Kapunan said at a forum in Quezon City on Saturday.

“There must be a burden of proof on the authorities of the school to prove their innocence,” Kapunan said, adding that other UST officials should not be let off the hook.

Reached for comment, Divina sent a text message saying: “Let me just quote Father Rannie Aquino, a respected legal luminary and a graduate of San Beda (College) like Atty. Kapunan: ‘It is foolish to include UST and its officials. They have no control over the movement of its students.’”

Divina earlier said in a TV interview that UST had “a very strict policy against hazing” and should not be held liable because the crime happened outside its Manila campus.

He added that Aegis Juris, of which he is a member, was not currently accredited by the university, further reason why the school did not share in the responsibility for Castillo’s death.

Divina also maintained that he had taken a leave of absence from the UST-based law fraternity after becoming dean eight years ago.

In an interview with the Inquirer, Kapunan clarified that her comments were not meant as a personal attack on Divina but that she was simply asking the NBI to follow the Anti-Hazing Law, which lists school officials as responsible for hazing deaths under their watch.

“It cannot just be the 18 neophytes or members of the fraternity,” Kapunan said. “It just so happens that the dean is Divina. If it was any other head, they, too, should be investigated.”

“The parents (Castillo) are saying no one should be spared,” Kapunan added.

Under Section 8(e) of Republic Act No. 8049, or the Anti-Hazing Law, former officers or alumni of the fraternity who were part of the planning of the hazing, even if they were not present, can be held liable. Faculty members who had knowledge of the hazing but failed to take action to prevent it can also be punished as accomplices under the law.

Kapunan said during the forum that since 1995, only one conviction had resulted from the Anti-Hazing Law.

“[The parents] don’t want the case to be buried with their son,” said Kapunan, a friend of the victim’s uncle. “They don’t want their son to be a statistic.”

The Manila Police District has filed charges of murder, robbery and violation of the Anti-Hazing Law against 18 suspects before the Department of Justice.

Kapunan is also the lawyer of Patricia Bautista, the estranged wife of Commission on Elections chair Andres Bautista. The lawyer and her client filed a disbarment complaint in the Supreme Court on Tuesday against Divina and 20 other members of the Divina Law firm.

They alleged that Divina had illegally given Bautista commissions for referring clients to his law firm, a violation of the Code of Professional Responsibility.