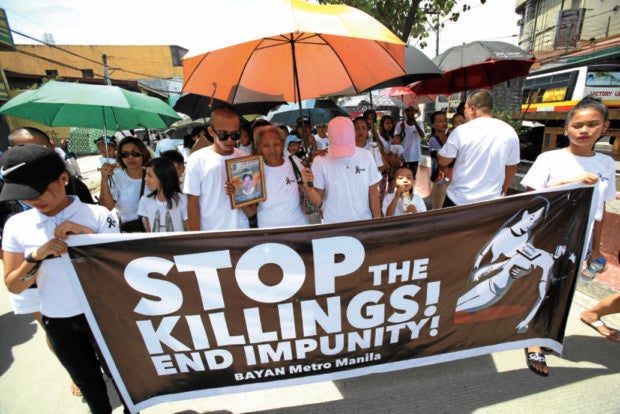 MOURNERS, TOO Relatives, friends and supporters of Leover Miranda, 39, who was shot and killed in another drug-related police operation at Manila North Cemetery, call for justice and condemn the continuing rise in drug killings during a funeral march. —NIÑO JESUS ORBETA

Detained Sen. Leila de Lima on Friday challenged her fellow senators to reopen the Senate investigation into the extrajudicial killings (EJKs) in light of a proposed resolution signed by only 16 out of 23 lawmakers to look into the deaths under the war on drugs.

In particular, she called out the members of the Senate majority to investigate the spate of killings under the Duterte administration.

“I challenge the senators, especially members of the Senate majority, to reopen the probe,” she told reporters on the sidelines of the hearing on her disobedience to summons case at a Quezon City court.

“This time, they should be serious about the investigation, and they should not whitewash,” De Lima added.

On Monday, lawmakers – mostly from the opposition – filed proposed Senate Resolution No. 516, urging the administration to “undertake the necessary steps to stop the spate of killings, especially of our children.”

A separate resolution – Senate Resolution No. 518 – was authored by Sen. Juan Miguel Zubiri and supported by 16 members of the majority bloc, including Senate President Aquilino “Koko” Pimentel III. It similarly calls for a stop to drug killings.

Zubiri said they were “left out” in the first resolution that was spearheaded by the minority.

The majority resolution condemns “in the strongest sense the [extrajudicial killings] and call[s] on the government to exert and exhaust all efforts to stop and resolve these extrajudicial and all other unresolved killings.”

However, De Lima said those issues should remain internal among the lawmakers. “This is not about the quarrels of senators. This is about the killings,” she said. “They should all come together to thoroughly probe the deaths.”

The female lawmaker had initiated the probe in the Senate late last year, but was terminated only after six hearings by Gordon, who was chair of the Senate justice committee.

His committee concluded that the killings were not state-sponsored. However, De Lima said this report was not routed to her office, and that she was only able to file a dissenting report only after it was submitted.

“They are trying to exaggerate the drug problem in the country,” she said. “Of course, there is a drug problem, but we are not sure because their numbers keep changing.”

“We are not a narcostate – this is only in their imagination,” she stressed.

A vocal critic of Mr. Duterte, De Lima remained in detention at the Philippine National Police Custodial Center in Camp Crame for several drug cases, which she claimed as mere trumped-up charges.

At the Quezon City Metropolitan Trial Court Branch 34, she faced her disobedience case, for allegedly inducing her former driver-bodyguard Ronnie Dayan to snub the House inquiry into the drug trade in the New Bilibid Prison.

For the first time, Mindoro Rep. Reynaldo Umali, one of the complainants in the case, took the witness stand to authenticate his judicial affidavit and the evidence presented in court.

Other than Umali, prosecution lawyer Albert Angelo Villalon said they would have the official photographer of the House of Representatives also to take the witness stand to authenticate the photograph of De Lima’s exchange of messages with Dayan’s daughter.

Villalon also said the prosecution intends to have Dayan to also take the witness stand, but he refused to disclose additional information.

The continuation of Umali’s cross-examination is scheduled for November.

Read Next
Duterte says he will order arrest of Ombudsman execs who will defy probe
EDITORS' PICK
This new condo in the South will make you want to turn a new leaf
Legarda: Ending Violence Against Women, a cause for all
Sara Duterte calls for supporters’ unity after Go’s withdrawal from presidential race
CHR hopes inequalities exposed by COVID-19 pandemic are addressed
BOQ monitoring 64 travelers from ‘red-list’ countries amid Omicron
Smart offers wireless fiber-like speeds to Filipino homes with country’s first 5G Prepaid Home WiFi
MOST READ
DOH: Booster doses for fully vaxxed adults to start December 3
Another disqualification petition filed against Bongbong Marcos
Ex-DOT chief Ace Durano convicted of graft over 2009 project
Roque defends Bongbong Marcos: ‘He was only 15 years old in 1972’
Don't miss out on the latest news and information.