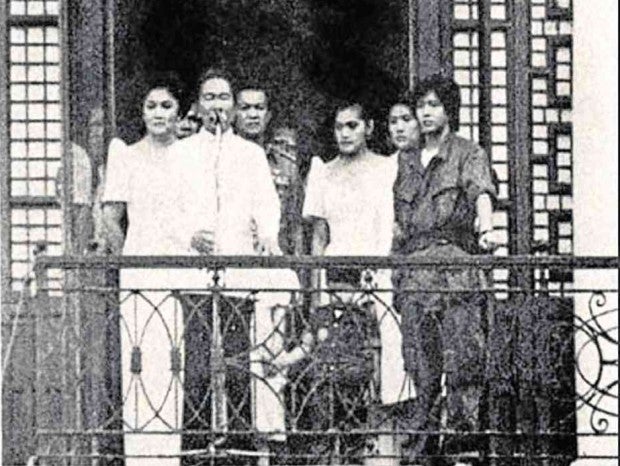 LAST HURRAH Dictator FerdinandMarcos, flanked by wife Imelda and children Imee, Irene and Bongbong, addresses his supporters from a balcony in Malacañang on Feb. 25, 1986, after taking his oath of office. MR &MS PHOTO

President Duterte posed this question about Imee Marcos and Ferdinand “Bongbong” Marcos Jr., who he said were still young during the rule of their father, the late dictator Ferdinand Marcos.

Mr. Duterte also said that “guilt is personal” and someone could not be held to account for a wrong that another person committed, unless there was a conspiracy.

Mr. Duterte made the statements in an interview aired over PTV 4 in the course of narrating how he got to know the Marcoses. His father Vicente was a Cabinet official during the Marcos administration.

“You say you prosecute, you punish… At the time, Bongbong Marcos was a young man, was only about seven years old,” he said.

“Ano kasalanan nila? Bakit di ako magpunta, mag shake hands? Ano kasalanan ni Imee? Bata yang sila lahat. Ang matanda lang doon si Imelda pati si Ferdinand. (What wrong did they do? Why won’t I go there, shake hands? What did Imee do wrong? All of them were young, the only adults there were Imelda and Ferdinand),” he added.

In 1972, when their father declared martial law, Imee turned 17 and Bongbong 15.

Marcos lifted martial law in 1981 and he ruled until February 1986, when he was ousted in a popular revolt after a rule marked with human rights abuses and plunder of the country’s coffers.

Mr. Duterte earlier said there was a proposal for the Marcoses to return part of their wealth to the country.

But critics said the Marcoses should return all of the assets they took and should be held accountable.