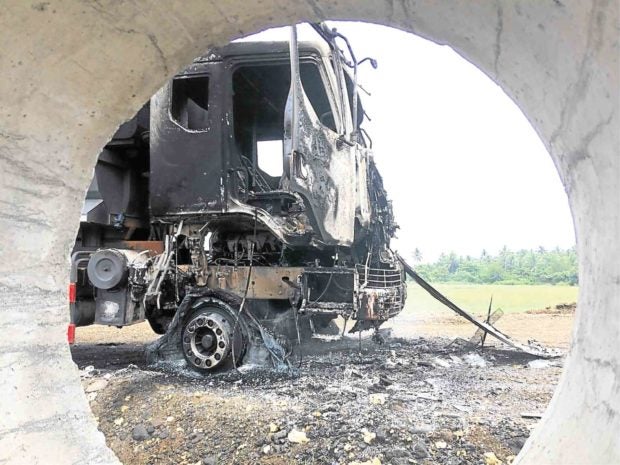 A truck is among those burned by communist guerrillas during an attack on the site of construction of Bicol International Airport in Daraga town, Albay province, whichwould be like the drawing in top photo if finished. —MICHAEL JAUCIAN

LEGAZPI CITY—Armed men believed to be communist guerrillas attacked the site of an airport under construction in a town in Albay province, setting fire to heavy equipment and drawing condemnation from military and civilian officials.

At least 30 suspected members of the New People’s Army (NPA), the armed component of the Communist Party of the Philippines, raided the construction site in Daraga town, in an attack that some of the guerrillas were heard as saying was punishment for the project contractor’s refusal to pay revolutionary taxes.

Driver Ronaldo Austria, a witness to the attack, said he was parking his truck when the guerrillas approached him and ordered him out of his vehicle.

“They told us to lie facedown and leave crawling,” Austria said. “After several minutes, I smelled gas.”

He said he then saw heavy equipment being used for the airport project burning.

A list of the burned equipment prepared by the town’s Bureau of Fire Protection office said that among those set on fire were dump trucks, a mixer, a grader, a mini-dump truck, a service vehicle and a crane owned by E.M. Cuerpo Inc.

A jeep owned by Sunwest Construction and Development Corp. was also burned.

E.M. Cuerpo was one of the project’s contractors.

Naz said the attack set back the timetable for the completion of the project.

Chief Insp. Arthur Gomez, information officer of the Albay police, said another group of guerrillas fired at police in the village of Bascaran in Daraga around 8 p.m.

It was a diversionary tactic, according to Gomez.

Gomez said that while police were in the gunfight in Bascaran, which lasted for up to 30 minutes, a loud explosion ripped through the airport project site, which was some 3 to 4 kilometers away.

Workers asleep in some of the trucks were ordered out by the guerrillas, he said.

Supt. El Cid Roldan, chief of the Daraga police, said at least three groups of guerrillas took part in the simultaneous attacks on the Army position, police in Bascaran and the airport project site.

Too steep a price

Capt. Jomar Clavel, operations officer of the Army’s 901st Brigade, said the guerrillas held workers briefly at gunpoint as they set fire on the construction equipment.

Some of the workers quoted guerrillas as shouting: “This is your company’s fault because they do not pay us! Kill them!”

Clavel said a house owned by Saldy Morta near the construction site was shot by the guerrillas with a grenade launcher, causing trauma to the family and neighbors.

Gomez quoted the project contractors as saying they could not afford the amount being demanded by the guerrillas.

“So sad. Another big setback after 12 years of effort. But we are not giving up,” Salceda said.

“This flagship project is a pillar of our development aspirations since tourism is our biggest potential,” he added.

Salceda asked the military and police to tighten security in the construction site.

BIA’s passenger terminal building was in its final stage of construction.

The attack was the guerrillas’ second on the airport project site.