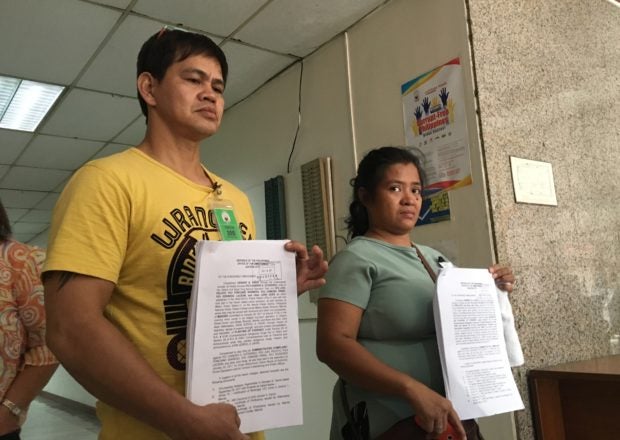 Denisse David and Normita Lopez show the complaints they are filing at the Office of the Ombudsman on Thursday. —Vince F. Nonato

The parents of two suspects killed in the government’s antidrug campaign have filed criminal complaints in the Office of the Ombudsman against seven members of the Manila Police District (MPD).

Launched with the help of lawyers allied with militant and human rights groups, the legal action came in the wake of a Social Weather Stations survey showing that the majority of Filipinos doubt the usual police statements about drug suspects being killed because they had initiated a gunfight.

A similar complaint was filed against Senior Insp. Jojo Salanguit and PO3 Gerry Geñalope and three John Does for the death of Djastin Lopez, a 23-year-old epileptic, on May 18.

The respondents were all from MPD’s Station 11.

In their complaint affidavits, the parents of David and Lopez denied that their slain children used drugs and owned firearms.

David’s father Denisse recalled that he last saw his son alive when he left for work on the night on Jan. 18. When David, a hotel room attendant, failed to return home, his father learned from the hotel supervisor that David left the hotel with coworker Kim Ocenar on the morning of Jan. 19.

Two days later, Denisse heard that two policemen had approached a watchman in his barangay to look for the families of two “roomboys” detained at Station 11.

Denisse rushed to the station but did not see his son among the detainees. One of them, however, shouted to tell him that three persons who were “natokhang” were later “brought to Delpan and you better check if your son was one of them.”

Natokhang was derived from “Oplan Tokhang,” the police antidrug campaign that encourages drug users and pushers to surrender so they can be referred to rehabilitation programs. But Tokhang has also acquired a darker meaning since many surrenderers were later killed either in police operations or vigilante-style attacks.

Homicide section officers at Station 11 advised Denisse to go to Cruz Funeral Parlor to check the bodies of three men killed in Delpan. Before leaving, he was asked if his son was a “shabu” (crystal meth) user. He said no.

Denisse found his son’s body at the funeral parlor but was only allowed to claim it after waiting for the autopsy and paying P12,000. His son’s valuables, along with the motorbike he used to go to work, could no longer be found.

The father was later furnished an MPD spot report of a buy-bust operation around 11 p.m. on Jan. 20 at the corner of Delpan and Lara Streets in Binondo.

The report showed that David and two other suspects “fought back” against the arresting officers before they were killed. The officers also recovered three guns, five plastic sachets of shabu, and the P500 buy-bust money from the trio, it said.

Doing his own investigation, Denisse learned from residents in the Delpan area that several policemen, some in civilian clothes and masks, did conduct an operation that night. The residents recalled seeing a motorcycle carrying two men—with the backrider in handcuffs—and later hearing gunshots.

In the second complaint, Lopez’s mother Normita said she last saw him alive around 5 p.m. on May 18, when he went for a walk toward the train tracks at the Hermosa-Pilar area in Tondo.

An hour later, Normita was advised by neighbors to contact her son as they noted the “police presence” in the site where he went. She later learned from her brother-in-law that Djastin was killed by the police.

Officers securing the site did not allow her to approach the body right away and told her to see the barangay chair first. She finally saw her son’s remains at Archangel Funeral Homes the next day.

Normita cited eyewitness accounts saying Djastin was talking with a friend when they were approached by plainclothesmen. The friend was able to run and hide, but the sickly Djastin could not go far.

According to a witness, she said, one of the officers grabbed Djastin as the young man raised his hands and yelled “Huwag po, huwag po, suko na po ako. (Please, don’t. I give up).”

“They pushed him till he hit the ground face up. Then they shot him,” she said, adding that the witness saw her son in death throes (nangisay).

After the shot, one officer slapped the fallen Djustin and shot him a few more times when he kept moving, she said.

Then on June 9, the MPD issued a “progress report” on Djastin’s death, this time saying he was killed in a buy-bust operation, the complaint said.

“The police keep changing their story,” Normita said. “My son was weak and sickly. He was epileptic. In that condition, he couldn’t fight back against the police.”

The two complaints were filed with the help of the National Union of People’s Lawyers–National Capital Region. Members of the human rights group Rise Up held a Mass outside the Ombudsman building in Quezon City after the filing.