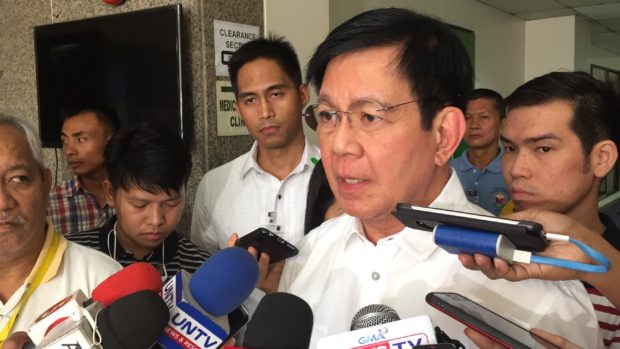 Senator Panfilo Lacson has charged former Customs chief Nicanor Faeldon with graft and economic sabotage due to his alleged involvement in rice smuggling before the Office of the Ombudsman on Thursday.

In an interview, Lacson said that he filed cases of graft and economic sabotage, a non-bailable offense, against Faeldon because the resigned Bureau of Customs (BOC) official allegedly allowed smuggled rice in Cagayan De Oro.

Lacson accused them of agricultural smuggling and violating the anti-graft law.

According to Lacson, Faeldon is liable for economic sabotage because the ex-BOC official allegedly sanctioned the entry of 40,000 bags of Vietnamese white rice worth P34.043 million without the required import permit.

“Despite respondents’ knowledge of the lack of any import permit for the subject rice shipments by CLTI, they nonetheless allowed their entry at the Port of Cagayan de Oro, and caused the unlawful release of these rice shipments from the BOC,” Lacson stated in his complaint.

Lacson claimed Aquino issued import permits for CLTI that has a validity that could “retroact from the time of the arrival of the shipment.”

“There is no law or NFA rule and regulation granting the Administrator the authority to issue permits with retroactive effect, much more issue permits without the requisite payment of taxes and duties being made. This shows that the issuance of import permits by Administrator Aquino in favor of CLTI was highly irregular, illegal,” Lacson asserted.

Lacson hit Faeldon anew for his “hypocrisy” in claiming to be on top of efforts to weed out corruption in the BOC when he purportedly allowed the release of the alleged smuggled rice.

Faeldon quit from the BOC amid the Senate inquiry into the P6.4 billion shabu shipment from China, which slipped past the bureau under his leadership, and allegations that he received money worth P100 million as gift or “pasalubong” when he assumed office in the agency in 2016, as divulged by Lacson in a privilege speech.

Faeldon subsequently turned the tables and accused Lacson’s son of being allegedly involved in the smuggling of cement.

Lacson, however, had vowed to file more complaints against Faeldon.