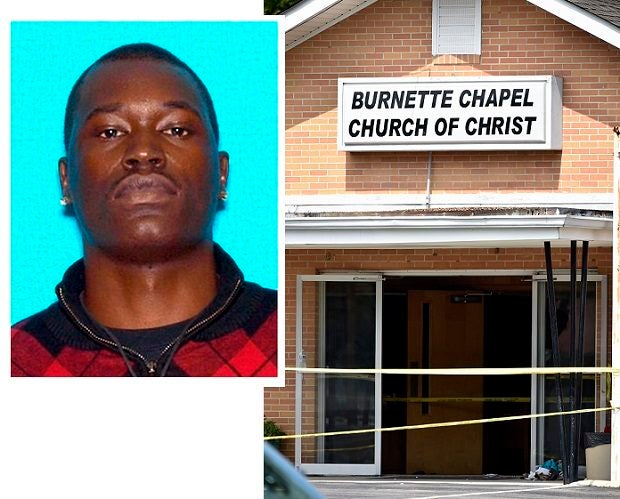 Police tape lines the scene at the Burnette Chapel Church of Christ after a deadly shooting at the church on Sunday, Sept. 24, 2017, in Antioch, Tennessee. Emanuel Kidega Samson (inset) allegedly entered the church and opened deadly fire. AP

NASHVILLE, United States — A masked gunman invaded a Tennessee church Sunday and opened fire, walking silently down the aisle as he shot unsuspecting congregants. At least one person was killed and seven others wounded, authorities said.

An usher confronted the shooter, who apparently shot himself accidentally in the struggle, authorities said.

No motive for the shooting was immediately determined. Investigators said they were not aware of any relationship between the gunman and any of the worshippers, said Don Aaron, spokesman for the Metro Nashville Police Department.

The gunman pulled into the parking lot as services were ending at the Burnette Chapel Church of Christ in the Antioch neighborhood. He fatally shot a woman who was walking to her vehicle, then entered the rear of the church and kept firing, shooting six people, police said.

It was unclear whether the self-inflicted wound was intentional, said Aaron said.

The gunman was identified as Emanuel Kidega Samson, 25, of Murfreesboro. Hours after the attack, he was under police guard at Vanderbilt University Hospital. Authorities were processing warrants to charge him, Aaron said.

Witness Minerva Rosa said the usher, identified by police as 22-year-old Robert Engle, was “a hero.”

“He’s amazing,” said Rosa, a member of the church for eight years. “Without him, I think it could be worse.”

The suspect said nothing as he shot churchgoers. As the gunman made his way down the aisle, Rosa said, the pastor started shouting, “‘Run! Run! Gunshots!'”

The gunman and six others were treated for gunshot wounds at nearby hospitals, along with Engle, who was pistol-whipped, Aaron said.

Witnesses were being interviewed by police.

Aaron said as many as 50 people were in the church at the time of the shooting, and that all victims were adults.

The small brick church describes itself on its website as a “friendly, Bible-based group of folks who love the Lord and are interested in spreading his word to those who are lost.”

Photos on the church’s Facebook page show a diverse congregation with people of various ages and ethnicities.

After the attack, the nearby New Beautiful Gate Church opened its doors to reunite Burnette Chapel churchgoers and loved ones.

New Beautiful Gate Pastor Michael Moseby said he is neighbors with Burnette Chapel Pastor Joey Spann and “my heart goes out to him and his whole church.

“As a pastor myself, you come with the expectation of sitting down and having a service and not thinking about what can happen around you,” Moseby said. “You never know who is going to come to the door or what reasons they would come to the door, come to your church and do something like that. We’re always on guard. We just thank God many more weren’t hurt.”

Nashville Mayor Megan Barry said in a statement that the shooting was “a terrible tragedy for our city.” She said her administration “will continue to work with community members to stop crime before it starts, encourage peaceful conflict resolution, and promote non-violence.” /cbb

Read Next
Man saves bus from plunging into 300-foot ravine
EDITORS' PICK
Being a celebrity isn’t wholly an ‘advantage’ in the election, says Sotto
Acer starts the year off strong with the Aspire Vero National Geographic Edition
Octogenarian jailed for ‘stealing mangoes’ freed after people chip in for bail
Gov’t eyeing COVID-19 tests in pharmacies
Gear up and get ready to play with Yamaha Mio Gear
Over 3 Million worth of prizes to be won at Smart Padala’s SENDali Manalo Promo!
MOST READ
Imelda Marcos trends on Twitter after octogenarian jailed for allegedly stealing mangoes
Help pours in for octogenarian jailed for ‘stealing’ mangoes in Pangasinan
Natural immunity more potent than vaccines during US Delta wave—study
Bongbong Marcos-Sara Duterte tandem adds Zubiri, Gadon, Marcoleta to Senate slate
Don't miss out on the latest news and information.