Thousands flock to UPLB to get P1M each ‘from Marcos wealth’

This was how former Sen. Ferdinand “Bongbong” Marcos, Jr. described the Saturday event at the University of the Philippines Los Baños (UPLB), Laguna campus that attracted thousands of people on the promise that they would each be given P1 million or gold bars from the controversial Marcos wealth.

But the younger Marcos disavowed any connection to the general assembly called by One Social Family Credit Cooperative.

“We have just received reports of people gathering because of promises of gold from the Marcoses. We do not know of, nor have any involvement (in), any of these gatherings. It’s a scam pure and simple. I have repeatedly warned the public against unscrupulous individuals who have been using our family to advance their personal interests. Today’s event is a classic example of that,” Marcos said in a statement.

Thousands of people ferried on rented jeepneys and vans showed up on the UPLB campus yesterday, clutching plastic-covered booklets that had a picture of former President Ferdinand Marcos on the front cover and the words Bullion Buyer Ltd. on the back.

The booklet, which cost P30 each, contained writings about the alleged achievements of the late strongman. 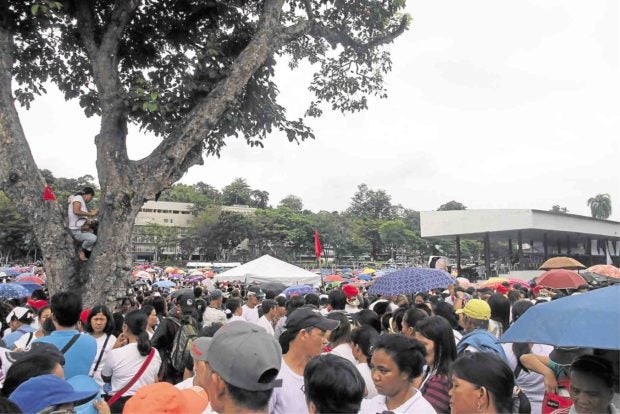 Thousands throng the University of the Philippines Los Baños campus to claim the million pesos promised them by a cooperative, in exchange for a P30 booklet on Marcos’ “achievements” they had to buy. —PHOTOS BY KIMMY BARAOIDAN

The crowd, some with children in tow, had come mainly from Calabarzon (Cavite, Laguna, Batangas, Rizal and Quezon), with a few coming from as far as Marinduque. Some had to leave their homes Friday evening to be able to make it to the whole day assembly.

According to documents submitted to UPLB, the group, which was founded in 2004, holds office at 182 Camerino Street, Barangay Lapidario, in Trece Martires City, Cavite.

But the person who answered the Inquirer’s call to the phone number provided to UPLB said the number belongs to a private household in Naic, Cavite.

A search on the website of the Securities and Exchange Commission also yielded nothing on the organization formerly known as Bullion Buyer Ltd.

The cooperative’s “pay master” who wanted to be referred to only as “PD” or “Pink Diamond,” said the group had P150 billion ready for distribution to its members. At least $15.2 trillion was also deposited in various accounts abroad, she claimed.

Manuel Cereno Jr., the group’s regional coordinator, said each family would get P500,000 to be given in tranches of P10,000 per month over four years.

He added that the other half of the million promised them would go to the cooperative that, in turn, would provide the members with livelihood opportunities.

“I think we can start (the distribution) before the year 2017 ends,” Cereno said.

Saturday’s event, which virtually paralyzed traffic in the town, shocked the UPLB community as the campus was where hundreds of activists went missing or were killed during Marcos’ martial law years.

The UPLB Student Council responded with a lightning rally in the afternoon, denouncing the “pro-Marcos” assembly and demanding accountability from the university for allowing the event. 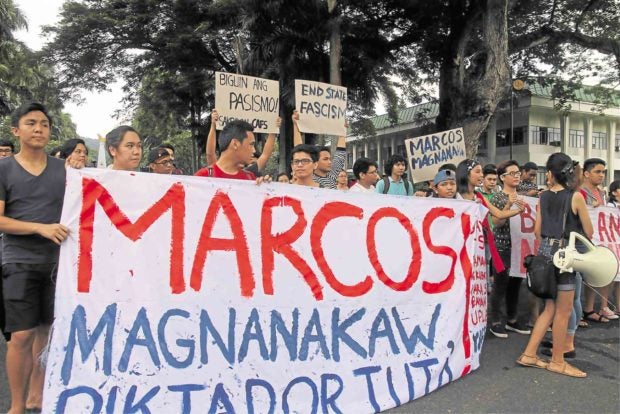 STOP THIEF Students at UPLB hold a lightning rally to protest a gathering that indirectly promoted Marcos’ achievements through a P30 booklet.

UPLB vice chancellor for academic affairs Dr. Serlie Jamias said the activity was approved in “good faith,” and that university officials did not know that the event was somehow connected to the Marcoses.

The coop’s chair, Emmanuel Destura Jr., whom members referred to by his code name “RD,” or “Red Dragon,” defended Marcos Sr. and his “quintillion dollars” worth of wealth that, he said, the late strongman had wanted to give to the Filipino people.

“We’ve been keeping this (a secret) for a while but President Duterte himself had already announced (it), ” Destura said.

In one of his speeches, the President said the Marcoses had expressed willingness to return some of their wealth to the government.

“Even before he became President, Apo (Marcos) was already wealthy,” Destura said. “He had four (offshore) accounts and his wealth grew with the addition of the Solomon treasure and the Yamashita treasure.”

It was “an utter lie” to call Marcos’ wealth “ill-gotten,” the coop official said. “What’s ill gotten were the treasures looted by the Japanese that they left buried in the Philippines. The national treasury was not even enough, (and Mr. Marcos) had to fund the (government) projects himself,” Destura said.

In an interview after the event, Destura admitted that the group was in no way connected to the former senator and younger Marcos.  He also has yet to talk to President Rodrigo Duterte about their program, said this son of a former Bicol politician. 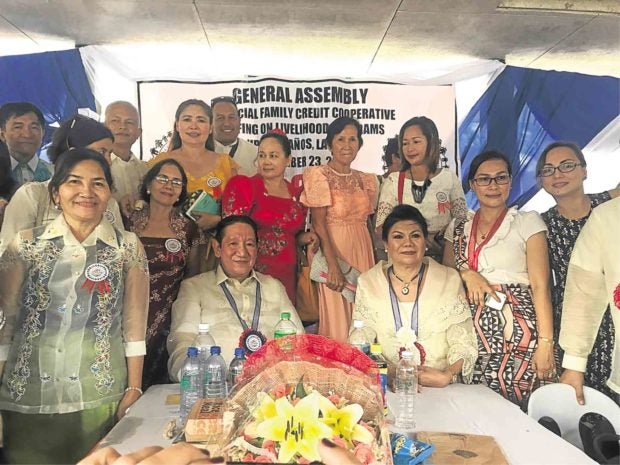 SCAMMERS? Chair Emmanuel Destura Jr., or “Red Dragon” (center, seated), with other officials of One Social Family Credit Cooperative, which announced plans of distributing the Marcos millions in a scheme that former Sen. Bongbong Marcos had described as a “scam.”

“But you know, the President also needs the money now for his war on drugs,” Destura told the Inquirer.

Asked how he knew that the Marcoses would have wanted to distribute their wealth, the coop official said: “(Marcos Sr.) himself (told) my father.”

Tricycle driver Tommy Malimban, 55, from Maragondon, Cavite, said he joined the cooperative in the hope of getting some money.

Said another attendee, Nita Isaias, 64:  “At least we got to travel to UPLB. This is my first time (here),” she said.