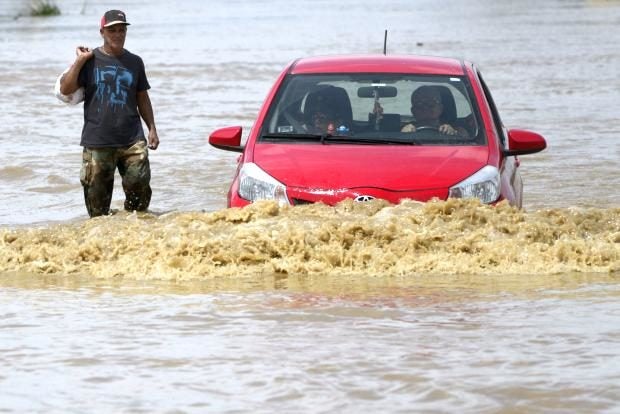 A resident walks on a flooded road after the passing of Hurricane Maria, in Toa Baja, Puerto Rico, Friday, September 22, 2017. Because of the heavy rains brought by Maria, thousands of people were evacuated from Toa Baja after the municipal government opened the gates of the Rio La Plata Dam. (AP Photo/Carlos Giusti)

SAN JUAN, Puerto Rico — Puerto Rican officials rushed to evacuate tens of thousands of people downstream of a failing dam and said they could not reach more than half the towns in the US territory as the massive scale of the disaster wrought by Hurricane Maria started to become clear on Friday.

Government spokesman Carlos Bermudez said that officials had no communication with 40 of the 78 municipalities on the island more than two days after the Category 4 storm crossed the island, toppling power lines and cellphone towers and sending floodwaters cascading through city streets.

Officials said 1,360 of the island’s 1,600 cellphone towers had been downed, and 85 percent of above-ground and underground phone and internet cables were knocked out. With roads blocked and phones dead, officials said, the situation may be worse than they know.

“We haven’t seen the extent of the damage,” Gov. Ricardo Rossello told reporters in the capital.

More than 15 inches (nearly 40 centimeters) of rain fell on the mountains surrounding the Guajataca Dam in northwest Puerto Rico after Maria left the island Wednesday afternoon, swelling the reservoir behind the nearly 90-year-old dam.

Authorities launched an evacuation of the 70,000 people living downstream, sending buses to move people away and sending frantic warnings on Twitter that went unseen by many in the blacked-out coastal area.

“This is an EXTREMELY DANGEROUS SITUATION,” the National Weather Service wrote. “All the areas around the Guajataca River must evacuate NOW. Your lives are in DANGER.”

An engineer inspecting the dam reported a “contained breach” that officials quickly realized was a crack that could be the first sign of total failure of the dam, said Anthony Reynes, a meteorologist with the US National Weather Service.

“There’s no clue as to how long or how this can evolve. That is why the authorities are moving so fast because they also have the challenges of all the debris. It is a really, really dire situation,” Reynes said. “They are trying to mobilize all the resources they can but it’s not easy. We really don’t know how long it would take for this failure to become a full break of the dam.”

Maj. Gen. Derek P. Rydholm, deputy to the chief of the Air Force Reserve, said at the Pentagon that it was impossible to say when communication and power will be restored. He said mobile communications systems are being flown in. But he acknowledged “it’s going to take a while” before people in Puerto Rico will be able to communicate with their families outside the island.

Until Friday, he said, “there was no real understanding at all of the gravity of the situation.”

Across the island more than 15,000 people are in shelters, including some 2,000 rescued from the north coastal town of Toa Baja, including several who were stranded on roofs.

The island’s electric grid was in sorry shape long before Maria struck. The territory’s $73 billion debt crisis has left agencies like the state power company broke. It abandoned most basic maintenance in recent years, leaving the island subject to regular blackouts.

“Some transmission structures collapsed,” Rossello said, adding that there was no severe damage to electric plants.

He said he was distributing 250 satellite phones from FEMA to mayors across the island to re-establish contact.
Secretary of State Luis Marin said he expects gasoline supplies to be at 80 percent of capacity because the port in the southeastern town of Yabucoa that receives fuel shipments received minor damage.

Hourslong lines formed at the few gas stations that reopened on Friday and anxious residents feared power could be out for weeks – or even months – and wondered how they would cope.

Some of the island’s 3.4 million people planned to head to the US to temporarily escape the devastation. At least in the short term, though, the soggy misery will continue: Additional rain – up to 15 centimeters (6 inches) – is expected through Saturday.

In San Juan, Neida Febus wandered around her neighborhood with bowls of cooked rice, ground meat and avocado, offering food to the hungry. The damage was so extensive, the 64-year-old retiree said, that she didn’t think the power would be turned back on until Christmas.

“This storm crushed us from one end of the island to the other,” she said.

The death toll in Puerto Rico stood at six but was likely to rise.

At least 27 lives in all have been lost around the Caribbean, including at least 15 on hard-hit Dominica. Haiti reported three deaths; Guadeloupe, two; and the Dominican Republic, one.

By Friday night, Maria was passing about 480 kilometers (295 miles) east of the central Bahamas with top sustained winds of 205 kph (125 mph). The storm is not expected to pose a threat to the US mainland.

Israel Molina, 68, found that Maria had ripped away roofing from his Israel Mini Market in San Juan.

“I’m from here. I believe we have to step up to the task. If everyone leaves, what are we going to do? With all the pros and the cons, I will stay here,” he said, and then paused. “I might have a different response tomorrow.”

Diana Jaquez, one of the owners of the Coquette hair salon in San Juan’s Santurce area, assessed storm damage with her husband Friday as their children played nearby. She said she hadn’t decided whether to leave the island.

“Business has dropped a lot,” she said. “People have other priorities than looking good.”

Outside her store, more than 100 people stood in line waiting to get money out of an ATM machine and hoping there would still be some cash left when their turn came.

New York plans to send about 240 National Guardsmen and state troopers to assist Puerto Rico and the Virgin Islands. The state is also sending drinking water, ready-to-eat meals, electrical generators and other supplies.